Well, I went out to see one of the possibly 10 best movies I’ve ever seen on Friday. I was all prepared to come back here and tell everybody 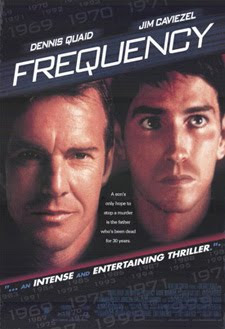 how awesome The Gift was, which I still might do… But then I saw what I’m now considering my new favorite movie. It’s replacing The Sixth Sense. It has to. The Sixth Sense gave me major chills. This one gave me the same chills and made me hyperventilate in a way that I thought I was having an episode. And I know I lost some degree of respect when I gave Unbreakable as high a rating as I gave it, but this is the real thing. Go see Frequency NOW! Bring a paper bag.

Here’s the premise. It’s 1999. There’s an old guy who can mystically communicate with his dead father in 1969 on a ham radio. I know, I know. You just have to accept the premise and move on. Like Quantum Leap or Back To the Future. Or the electoral process. Why 88 miles per hour? No, it doesn’t make sense, but no one has ever time travelled yet to the knowledge of the greater public. That’s another great thing about the concept of time travel in a film. Nobody’s really gonna pose a serious argument that it wouldn’t happen that way. “There’s no way dogs can see Dean Stockwell, that’s just silly.” “I seriously doubted that if Old Jennifer saw Young Jennifer that it would begin a chain reaction that would unravel the very fabric of the space time continuum.” So yeah, just accept it and move on, OK? It’s for your own good.

I don’t want to ruin the movie by going into detail, but let’s just say that (as you would expect from a time travel flick) the son from the future tells his dad (Dennis Quaid) some info that helps him avoid his death, but then in turn, creates a chain reaction that does bad things to a lot of people. So he has to help dad try to put right what went wrong. And I know I said that there can’t really be any room for argument about time travel, but it does need to be at least consistant with itself for the duration of the movie. This storyline seems to be air tight to me, and it’s extrememly well written. And while nobody ended up sleeping with their own grandfather in Frequency, it was still a good romp. I’m giving it the new highest ranking of what would be the equivalent of a number whose limit is approaching 11 bugs from above, hence bringing it as close as you can get to 11, but still being a little bit higher. For those of you who aren’t math nerds, that’s 11.