Well, I normally do a movie review every Friday also, so I’m going to try to keep up with that theme again. Especially 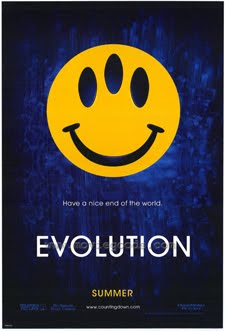 since I’ve seen a whole bunch since my last review, which I think was on Citizen Cane. Speaking of great movies, I saw one of the best and original movies I think that’s been made since the whole concept of stringing together still images and projecting light through them while moving the string of pictures at a rapid pace to create the illusion of movement. And about a week later, I saw Evolution.

Some people refer to a good idea ruined as being like pouring ketchup on filet mignon. Well, this wasn’t exactly filet mignon. Let’s say this was like taking broccoli bites and smothering them in searing hot flesh. I say that because I’m sure there are a handful of people out there that like it, but you really wouldn’t want to play bridge with any of them. And because I just saw Hannibal.

Anyway, the concept is great. Alien life form lands and starts out as a simple one-celled blob in a petri dish. But instead of this one thing growing and getting out of hand, like all the other movies like this, the life form begins to evolve. So within a few days, there are already creatures walking around, and then they get wings, etc. This might have been a great thriller type movie, as it was originally intended. But then Ivan Reitman got a hold of it. Hey! This looks like Ghostbusters! I made Ghostbusters! And so to make a bad movie short, they wind up killing the big out of hand evolved life form that was to end human life on earth with a Walmart’s amount of Prell in a scheme that made chemistry majors around the world all heave simultaneously. And even worse was that there were some decent actors in this. David Duchoveny and Julianne Moore starred in this with a cameo by Dan Akroyd. The Sprite guy and Stiffler were actually better commodities before this piece of crap. Don’t go rent it. Fight the urge. Or suffer the consequences. 2 1/2 bugs (all for the story concept (and it can’t be worse than Blair Witch)).

Yeah, but he also made Ghostbusters II.