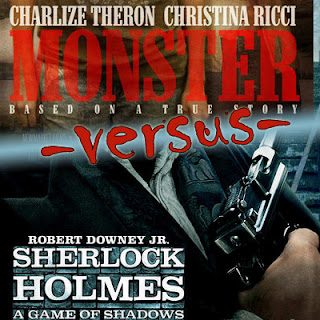 Two 9-buggers meet in the last of the second round matchups. And these movies don’t have a lot of crossover.
Title: I err on the side of the one-word titles. Besides, the full title of Sherlock breaks the 7-word rule. (Point, Monster 0-1)
Funnier: What’s not funny about sexual assault and murder? (Point, Sherlock 1-1)
Better Turn: Not only is it dramatic, but it gets us to a place of understanding. (Point, Monster 1-2)
Better Ending: I do love the truth behind the end of Monster and the completion of the character, but Sherlock’s question mark was too funny. (Point, Sherlock 2-2)
Better Message: Not a lot of movies can get you to understand a serial killer. Especially not one from real life. (Point, Monster 2-3)
Better Acting: Love Downey and Law, but not even close. (Point, Monster 2-4)
More Creative: Guy Ritchie has fun with this one. (Point, Sherlock 3-4)
Poster: I think Monster may have actually been trying to look like it was made in the 80s or early 90s when the story took place. That doesn’t necessarily mean it’s better. (Point, Sherlock 4-4)
Watch again: I do love Monster and I put the documentary about the actual serial killer on my Netflix list, but Sherlock was too fun. (Point, Sherlock 5-4)
Overall: What a comeback! Downey Jr. takes the last spot in Sweet 16. And now the matches actually get easier. Winner: Sherlock Holmes 2 (5-4) 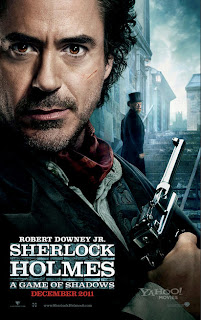