Review of “The Ring”

Before I critique this movie, let me tell you about the plethora of emotions I went through before I even saw this 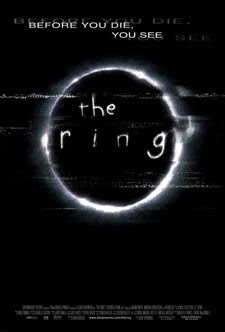 movie. When I first heard of The Ring, it sounded like a neat and rather original concept. I was interested. Then I saw a poster for it. And a cheesy TV ad. They reminded me that I don’t like horror movies. So it was over. I had already made plans to never watch it. Then all my fear junkies came back from seeing it opening night saying how good it was. Big deal. They said the same thing about Tremors 3 (yes, there’s a 3). Then some people whose opinions I actually care about said it was good and I should go see it. Then more people. Then everybody said it. And who am I to tell everybody they’re wrong (the same guy you were last time you did). So that’s what got me out to the theater. So before I even saw this trippy flick, I was already going through this roller coaster of emotions about the film. Actually, it was more like a roller coaster of opinions. But who’s counting (and who’s still reading)? The Ring is a serious horror movie. It’s not the crappy teeny bop bubble gum scary movie like Scream and I Know What You Did Last Summer and it’s not the beast out of control wanna be horror movie like Deep Blue Sea and The Hot Chick. It’s like nothing you’ve ever seen before. Unless you saw Stir Of Echoes. Well, not exactly. If you cut up Stir Of Echoes into 52 pieces and shuffled them a little bit and cut the corner off of all the face cards and threw away all the diamonds and replaced them with 13 pieces of an unidentifiable sticky substance, you’d have The Ring (I think we lost him). The main character has no idea what they are looking for and only has a vague idea of where to start. Piece by piece, you learn more as the filmmakers see fit. There’s even a prophetic-for-no-reason son in both of them. The difference is that while Stir Of Echoes kinda makes sense in the end, The Ring is off the hook. OK, so there’s this videotape where you watch it and get a phone call correctly predicting your death a week from that moment. Well, what if you’re not near a phone? Or what if you only watch half the tape. Or what if you were in the room while it was playing but trimming your mustache or something else? So we look past these practical issues. Then there’s the ridiculously obscure backstory. Something about an insane girl, a torturing father, and what the hell was up with the horses? Why did the horse go nuts on the boat? I was left asking myself that question about a lot of stuff in that movie? Why was that scene even in the movie? Can’t answer that one.

I think I’ve begun to confuse myself writing this review and I would like to stop now. It is a very scary flick. I recommend watching it alone at night with all the lights out. And I know it won’t happen in this day and age, but I think it should only come out on videotape when it comes out. And if it does come out on DVD, rent the video. Go old school. It’ll be worth it. It would be even cooler if they re-shot like half the scenes in the movie and replaced the videotape with DVDs for when it comes out in Blockbuster. That would really fuck me up, and as a professional wiffleball referee, I can guarantee it would be worth the production cost. Man, would that be freaky! OK, I’m done with that thought. Go see it. As soon as you can. 8 1/2 bugs (bonus bugs for being a good horror movie without selling out, there ain’t many).

My sister and her boyfriend recently bought an RV and decided to give up the luxury of a steady income for a life of considerable doubt, second-guessing, and Ramen noodles. And I really wish I had the balls to do it. Anyway, they are currently on their way to San Diego to try to buy tickets off scalpers to the Superbowl. I don’t know exactly how expensive tickets are, but I imagine it’s a lot of Ramen noodles. Anyway, my sis took the time out to e-mail me from El Paso to thank me for my Christmas gift to her…

“Thanks a lot for the radio – good idea! We use it all the time – its getting us through the playoffs and we get to hear great local talk radio shows hosted by stereotypical old male hicks wherever we are, and hear some news – but some places we’ve been actually didn’t have any news.”

-Excerpt from my vagabond sis

I guess a worldwide nuclear threat isn’t big enough to make it onto their radio stations. Hell, they probably wouldn’t even realize it happened for a solid week.

Watching DVDs from now on,