I got a bunch (possibly bunches) of e-mails after I wrote my review of The Ring telling me I should see Signs. Like with 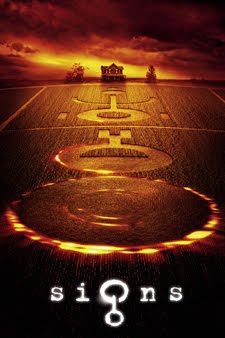 the lights out in the complete silence, in the basement if possible, blah blah blah. It then dawned on me that I hadn’t told everybody that I know how I felt about the film. So here is ver batem (whatever that really means) the message I sent to Terry:

Of course I saw Signs. I gave M. Night Shalayaman’s first two films (well, first two well-known ones) a collective 21 bugs out of 20. That’s a lot of love for the man. So I went out and saw Signs on opening night. Mind you, I have reasonably high expectations for the guy since I loved his last two films. And of course with all of them, there’s gotta be a twist to the ending or it’s just not an M calliber movie (I’m on a first name basis). And in this flick, the ending sucked. I was more dissappointed in a movie than I have been in a very long time. I was willing to overlook the fact that these highly developed creatures, capable of creating vehicles to travel light years away, could not open wooden unlocked doors. But when I found out that they were deathly allergic to… wait, where have I heard this before… water!!!, I was pissed! Very angry at the man. Did these aliens not do their research? I would think the first thing any alien would know about our planet is that it’s close to 3/4 water. And the life forms on it are 2/3 water. (On another note, if I was the Wicked Witch of the West and I knew there was a substance that could, oh, say… melt me, I wouldn’t leave a bucket of it just lying around on a wall somewhere. Like I don’t leave buckets if battery acid just sitting on my desk at work.) And the fact that the whole thing was about Mel’s faith being lost and then found again was a great way to play it. I’ve seen this trend in his other stuff (including a little known film called Wide Awake with Dennis Leary and Rosie O’Donnell, and of course several child actors – and by the way, there’s a reason you never heard of it). Anyway, I liked that particular concept… but my problem was with a very specific, yet extremely important part of the climax of the film. Mel’s wife was trapped between the car and the tree and given one last chance to talk to Mel (great thought, I’ve never seen that before). “Swing away.” Now I understand that it needed to be something trivial to get the whole loss of religion part across to Mel (we’re also on a first name basis), but “swing away?” And then Wakeem (I refuse to spell his name correctly) beats the alien with a bat? That’s it? I would have even been able to overlook the water thing and the fact that this climax came after the world was already saved from mass extinction of the human race (it’s kinda hard to have a second climax after that) if it was something better than Swing Away. Like, just off the top of my head, if instead of “swing away,” she said “get motor oil” or something like that, I would have been happier. But Wakeem beat the alien to death with a bat. Just stupid and anti-climactic. OK, the motor oil thing woulda been too, but I think if he took another week to fine tune the script a bit, he coulda come up with something. But I did like the asthma saving the boy. That was a great touch. See!! It was so close to great, but I think he shot his load of good ideas on the asthma boy and alien gas and the wife dying pinned to the tree, not to mention the way he handled the crop circles being the landing patterns and how he dodged the fact that they were just pranks in real life. No more creativity left but to swing away and have the aliens die when subjected to fucking water. Maybe lemonade or shampoo or something. But that’s getting a little too close to Evolution, the epi-center of all horrible movies with good potential. So I would be torn if I had to rate the film because I went in with impecibly high standards and I did like most parts of it. But I was thoroughly dissappointed with the ending, which is what stuck with me. He also needs to convince himself not to act in his films anymore. It wasn’t so bad when he had one or two lines and he could kinda hide himself, but this was a really big and important part with a lot of dialog at the beginning of the turn of the movie. Oh well. I’ll still be looking forward to his next film, whatever it’s gonna be. This turned out to be a much longer e-mail than I ever planned to write, but I guess I needed to get it off my chest. Don’t feel the need to write a novel back to me. And avoid at all costs Evolution if you can.

I know I said I’d be torn, but I just hafta rate it someway. I’ll give it 7.5 bugs. It is better than most, but I’m still pissed at those few huge details that could have easily been avoided if he really cared about his film audience (boy, he’s really taking this personally).

This quote came from one of my deadbeat roomies over the summer. I was driving Colin to work, or maybe the bank or something (probably the gay bar again), and 95 had a sign up that said “NEW TRAFFIC PATTERN.” So I was prepared to get over a lane or jump a ramp or something. Well, all it was was a lot of orange barrels on the shoulder of the road, to which Colin started quickly pointing to and counting…

Oh, that math humor! (Dorks, both of them)

Breaking the patterns of chaos,