I hate fuckin Brick Street. If any of you out there are really my friends, you won’t make me go back there again. Like next time I’m at a party and somebody 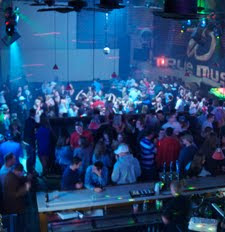 says “let’s go to Brick Street,” I’m just gonna go jogging or something. Something healthy. First of all, don’t ever anyone try to defend going there by saying “I want to go dancing.” Because that’s not dancing. I’ve seen dancing and that’s not it. That is holding a bottle of beer and spinning around. And those are just the classy people. The majority of the “dancers” there do what is closer to an erect form of lap dance (yes, I’m aware of the double meaning). It’s not dancing. It’s a mating ritual. And I can’t stand guys that do this gay ass dance probably started by a movie with Vince Vaughn and/or Will Ferrell. The one where they grab their foot with one hand and the back of their head with the other and gyrate back and forth as if they’re getting punched in the stomach and subsequently hit in the spine with a baseball bat over and over very quickly. This is probably closer to dancing than those girls who put their hands on their knees and move their booty around in concentric circles, but at least they give me something to look at. Does anybody out there see a guy do this dance and go “Sweet! That guy is cool!” Because I can’t picture anybody I know who wouldn’t want to hit the guy in the knee with a 4 iron. I just wanted to go up to this guy and just shove him. If it didn’t knock him over and hurt him, at least he’d have to break form and stop doing that. There was this girl who was kind of attractive that I was thinking about going over to talk to since we shared the commonality of having friends out there who were “dancing” while we were sitting in booths wondering if we should just walk all the way home again or wait and hope that maybe somebody we know might leave soon and end this debacle. Then this guy comes over and does that retarded seizure dance and actually starts talking to the girl. And then they started making out. God, I hope he knew her because if that shit worked, I’m packing and leaving this stupid town tomorrow cause I don’t have a shot. I mean I can do the seizure shuffle (this is the dance’s new name), but I will never stoop to those tactics. I have too much pride in whatever actual ability I have to dance. So in case you have never been there, Brick Street is one straight up grindfest. And normally I’m too annoyed, sober or outnumbered to sp 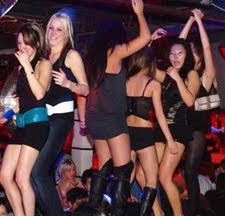 in my game while there. I think I actually may be passed the days where going to clubs and grinding on college girls is the thing for me to do. Or maybe I’m passed the days where they’ll let me. Either way, I think I’m passed the days. If you just look at the crowd from the upper level, it’s like one organism. One giant horny organism. And I liken the chicks that go there to bees. They go from flower to flower, never satisfied with just one, until they get drunk enough to let the flower they pass out in to take her home and play with her stinger (too far?). Next time I go there (in case I don’t have running shoes with me), I’m covering myself in pollen. I think that’s my best shot. If nothing else, it will be something to remember the night by. Other than me walking home alone in the pouring rain writing this little diatribe in my head. Maybe the next day I’ll run into some girl who will be like “Hey, you’re that guy from Brick Street who covered himself in pollen, right? Cool.” They say there’s no such thing as bad publicity. I’ll prove them wrong.

Where the hell was I? Ah, fuck it.

“Being single is like Bridge, no one knows how to play and old people are always giving you some skewed version based on what they think they remember.”

Somebody call me if you want to go watch a movie Friday night. Or sit down and have an actual intelligent conversation.

Boycotting fun for a week,