Review of A Dangerous Method 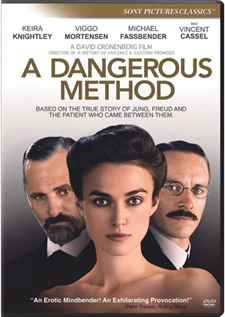 Keira Knightly is in the trailer of this movie getting spanked and saying in broken English that it excited her. And this movie was called “A Dangerous Method.” That is how you sell a movie, ladies and germs.
OK, so all of this really happened. There was Freud and Jung and this female patient turned doctor who brought the two together and tore them apart. There was some infidelity and questions about what was infidelity and quite frankly a lot less spanking than I was led to believe. And I think they told Keira Knightly to try to be as unattractive as possible.
As it turns out, the “dangerous method” they were referring to was what psychology commonly practices today. Talking. Talking is the dangerous method. I wasn’t expecting it to be a cookbook or for Viggo Mortensen to see dead people, but talking? Maybe it’s because I grew up talking, but since when is talking more dangerous than electrocuting people in tubs? Or maybe it’s an ironical title. Like the movie “23,” which isn’t at all about Michael Jordan. Either way, this movie bored the crap out of me, and I typically like those brainier-type flicks. 3 bugs (out of 10)