Overtime is the Right Time

Finally, after years of petitioning, picketing and writing letters (Ed note: the most he ever did was 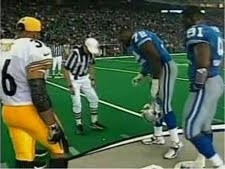 whine publicly about the subject on his facebook page), the NFL has changed its stance on overtime. The Dustin Fisher “Be the change you want to see in the NFL overtime rule” campaign finally paid off. But I’m not entirely to thank. I believe Gandhi deserves at least a shout-out. Woot to the Zen master!

So the rule used to be 100% complete “sudden death.” Or “golden goal,” if you’re not into all the negative energy surrounding picking on the losing team. The problem with that is that a lot of teams would run the kickoff back to the 40, get two first downs and kick a 40-yard field goal to win the game, without the other team ever touching the ball. This sucked for the team and the fans of the game that don’t believe that field goals should count after the 3rd quarter. Sure, there were arguments made that defense is also a facet of the game and you had 60 minutes to break the tie the first time around and a whole lot of other crap that didn’t make any sense at all. But it was really anti-climactic to see a great game decided without one team even getting to see the ball at all.

So it’s good to see that the Competition Committee decided to get rid of the sudden death aspect of the game. Except during the regular season. Or if you score a touchdown. Well, it’s a start at least, albeit a needlessly complicated one. But it’s good to see the fruits of my efforts did not go in vain. Next up: getting a top put on the goalposts. I’ll let you know when I come up with a catchy slogan title for that. I never honestly thought I’d get this far. Thanks to the Competition Committee, headed by Jeff… wait for it… FISHER. Coincidence? Unlikely.