Review of My Week with Marilyn 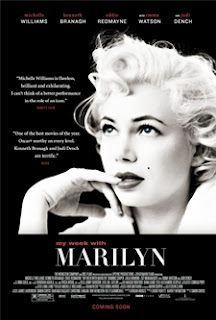 If you like biopics of extremely well-acted, troubled three-dimensional characters, you’ll love My Week with Marilyn. If not, you still get to see Michelle Williams’ naked ass.
This was the story of an American who has trouble assimilating herself to any culture, let alone stuffy old England’s. Michelle Williams was justifiably nominated for an Oscar for her work as Marilyn. I was going to say that Kenneth Branaugh probably deserved a best actor nomination for his ability to convey anger through a smile. Turns out he was. Good job, Academy.
The movie also had Emma Watson in it, which was a nice little surprise. It’s good to see she’s already given up her dream of getting a college degree. And because it’s required in every British film, Judi Dench is also in this movie. On a side note, she’s apparently not a dame anymore. That’s curious.
Anyway, Michelle Williams plays Marilyn beautifully and helps the world understand not just what it must be like to be Marilyn, but any movie star. Any troubled, beautiful untrained movie star who can get any guy or anything she wants at any time. Like an old school Judy Greer. 7 bugs (out of 10)