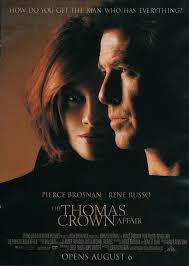 I saw I really good movie last night on DVD. It’s a little known movie called the Thomas Crown Affair. Actually, I didn’t hear about it as much as I think I should have. Everyone that I talked to said it was really good and I believed them, but I think they should have been more animate about it. Like nobody actually went out of their way and told me to go see it without first being prompted. Like I’m doing to you right now. That’s what people weren’t doing.
So it starts out with a really good action scene in which a couple of guys steal an expensive impressionist painting. That immediately sets the tone for the film. In the next scene, a couple of cops show up and hypothesize what they think happened when the sexiest version of Renee Russo anyone’s ever seen shows up and throws wrenches all over the place (not literally). It looks like a really good Columbo-type mystery that I haven’t seen in a while. Except nobody’s dead. So I’m psyched to find out what happens next. Then 45 minutes into the film, I got scared. It started to turn into a romance. I figured they had just wasted a perfectly good storyline by turning it into a romance. About half an hour later, it got better again. The last couple scenes fixed everything I had questioned about the film to that point. It actually knew of its flaws, which weren’t really flaws at all, because they were resolved. If you don’t know what I’m talking about, it’s because I’m not making sense. Well, for example, I had figured that it was just a romance story, but they showed me that they just needed to use romance as a plot device to further along the whole mystery angle. And I was pissed that they didn’t resolve Dennis Leary’s character. But with 5 minutes left, just before time ran out, they did. And the close to last scene was an excellent climax just where it needed to be. Anyway, go see it. They’re grammar is a lot better than mine. 9 1/2 bugs.

I had to go to somewhere on campus I usually don’t go, and I felt like I had entered another universe. It was weird. All they talked about was politics. And they kept laughing. I had no idea what they were talking about. Occasionally I recognized a name, like Strom Thurmond, but I was lost. I felt so stupid. Then I realized that to them, that stuff is like sports is to us over in the Retriever Activities Center. They’d probably be lost if we started talking about the Australian Open, I’d bet. Or maybe I really am just stupider than them. Anyway, I was speaking with another two ladies and a third lady who I swear to God I’ve never seen before walked into the office. We stopped talking as we noticed she needed to say something, and just before she started telling Norma what she came to say, she glanced at me and said “Oh, Hi Dustin” and continued on talking to Norma. I was stunned by this. I had no nametag on, and I hadn’t ever been in that building in the past year, let alone that office.
Was I really that popular? Or notorious? Or drunk?

Me: (to Norma, after she left) “How did she know my name?”
Norma: “She probably watches Cops.”

Or maybe she’s a member of the AOL Video Personals.