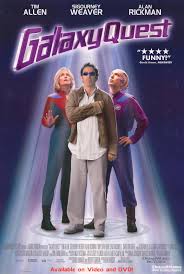 Somebody liked the plot of A Bug’s Life so much, they turned it into a live action film set in space. And it works. So how did it work? Well, it was like a Star Trek film and a farce of a Star Trek film all wrapped into one. Kinda like how Good Burger was a bad film, and a farce of a bad film at the same time. They had ILM do the special effects and it showed. The actors and the casting was excellent. Tim Allen played an untalented, arrogant hack of an actor. Alan Rickman played an English Shakespearean actor who always finds himself in roles not worthy of him. And Sigourney Weaver played a chick with breasts. This one I didn’t understand. I saw the entire Alien trilogy, for better and worse, and I don’t remember anything like that ever happening. Kinda makes you appreciate wonder bras and the like. And this black guy from Veronica’s Closet played a character that came dangerously close to being a Chris Tucker, Martin Lawrence, or Jamie Foxx type character in the beginning. But he regained his composure and didn’t ruin the film for me, where someone in his position easily could have (as noted by the fact that I cannot watch The Fifth Dimension ever again). So I definitely recommend this film to everybody. It’s funny in a non-typical Tim Allen way. And there’s a little drama in there too that he doesn’t screw up. So bare through the necessary 45 minutes it takes to set up the main plot, and I can guarantee laughter. 8 bugs. But 8 big ugly scary alien bugs.

I don’t know if you know the principals behind AOL Instant Messenger, but if you type a message to me, the entire sentence pops up on my screen when you hit enter, and vice versa. So many times, when both parties are typing at the same time, the messages will pop up one right after the other, before the parties have a chance to read what the other had written first. Well, you get the point, I hope. Here’s what happened in a conversation between Good Joe and Tony the day it snowed a lot and Joe was supposed to come down to MD for the night:

This was an actual conversation, and mind you, I have no idea where that penis remark came from. I hope it was just random, because if it was inspired by “smart move by not coming down here today,” I’m scared. Also, I guess I should be a little bit discouraged that they aren’t calling for many inches at all this entire winter.