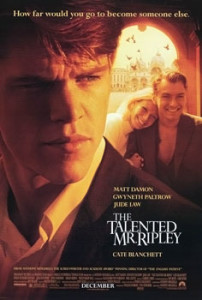 First of all, don’t go see The Talented Mr. Ripley. I was distracted by the good reviews of the film, and I prefer to not know anything about it going into the theater. But I wish I had followed my gut on this one. Though it did have Gwyneth Paltrow in it which helped in convincing myself to go see it. But it was very disturbing and long. One thing you might want to know before you decide to supersede my warning is that there are a lot of homosexual undertones and male nudity in the film. I didn’t know this. I went with Good Joe and only Good Joe. If we had a girl with us, or even a guy with us for that matter, we at least wouldn’t have looked like we were on a date. But it was just the two of us. Walking into the dark movie theater together. People must have definitely thought we were a couple. Two guys together in a movie theater watching a movie about gay guys. Sharing a drink. Holding hands. Anyway, it’s important you know that going into  the movie, if you choose to watch it. It might affect who you ask to go with you. I’m guessing that the fact that it was weird and about homosexuals is what made it such a hit with the critics, because I really couldn’t see too much else going for it. The acting was good, but not much else was good. The thing was over 2 hours and there was never really a climax. The closest thing to a climax came about 30 minutes into the film. The rest of it was interesting and the plot twists were unexpected, yet believable, but it rambled on and just kept happening. Kind of like the end of Maverick, only with an extra 45 minutes. After the first 4 plot twists, I had gotten the hint that it wasn’t going to end that easily. And when the screen did finally go blank, I had to wait for the credits to roll just to make sure I could leave at that point. And there were naked guys in tubs too. But not in a funny way. (Refer back to the “disturbing” comment.) Aside from the blinding male nudity and length of the film, it also just wasn’t very interesting. You never found out where Matt Damon came from and what his motivation was, if there was any, which made it harder to relate to his character. 2 1/2 bugs. I won’t ever watch this movie again. And this is two strikes in a row for Matt Damon. And finding out that this film is the first in a series of 4 isn’t helping his batting average either. Sorry dude. I’ll get around to watching Saving Private Ryan soon enough to get you back on base (please don’t try to piece together that mixed extended metaphor).

The one good thing to come out of this film was a really good on the spot joke of mine. I don’t like to quote myself, but this is rather topical and borderline clever. Anyway, Matt Damon had just got finished beating this guy to death with a marble head because he wouldn’t sleep with him. There was a close up shot of the marble head rolling across the floor with blood all over the entire side of it. I turned to Joe and said…

Not that gay,
Extendo!

P.S. – When we got out to the car and turned it on, “It’s Raining Men” was on the radio. I’m sure we both realized it, but neither of us acknowledged it. But neither of us turned it off either. I think I might have actually been humming along.