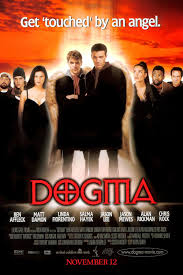 Really quick, I’m gonna go over how I felt about Dogma, my most recent theatrical sojourn. Instead of doing this in paragraph style, I’ll give a test group of ten factors of the film a bug rating between 0 and 1.

My head explodes when Alanis sings too. So it looks like Dogma gets 3 1/2 bugs, which is about right. I appreciate its attempts at making a farce of organized religion, but most of its attempts seemed flaky and not completely executed. The film was well researched, which is something most open attempts to mock religion are not, but it wasn’t enough to keep me interested. And Jay and Silent Bob type humor is just a little too crass and unfunny for me. Ben and Matt really carried the film for those people who feel the same way I do about Kevin Smith. Of course I didn’t like Chasing Amy at all, for what it’s worth.

Well, it certainly appears as though we survived y2k with only a few minor scratches. For example, if you checked UMBC’s Athletics webpage yesterday in Netscape, it would have said “Jan 03, 19100.” But there was no major power outage, no idiots strapping themselves to bombs and walking into Central Park or DC, and frankly, I was a little disappointed. Apparently, they closed the tunnels in and out of New York and went so far as to wire the sewer lids shut to avoid such an incidence. Seattle even cancelled their planned New Years Eve shindig to avoid terrorist affairs. I agreed with them at the time, but now that nothing happened, I think Seattle is a big wus city. I guess all the smart terrorists will be out next year, at the end of the real millennium, when the ill-equipped, short-sighted public who all decided sometime last year that the fact that we get to write a 2 as the first digit of the year on our checks now was a good enough reason to ignore certain historic data will just treat it as any other minimum security New Years Eve. It’s just me and Al Franken left, isn’t it?

Anyway, my mom asked what I was doing for New Years Eve, if I had planned on going to DC or New York or anything, to which I told her that I was just going into Baltimore City if anything…

“OK. So just your local looting and rioting.”
-Mom

It wasn’t even that exciting.