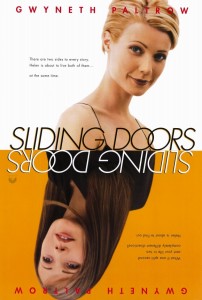 Sliding Doors – Gwyneth Paltrow plays a hot British chick in a Twilight Zone type romance. How can I not give that one 10 bugs? Everyone does an excellent acting job, and the one-liners sound scripted by some excellent actual comedians. The film cuts back and forth between two realities, one in which she makes a subway and gets home in time to find her boyfriend cheating on her, and another in which she doesn’t make it into the subway on time. I normally think romances are too cheezy to merit a 10 bug rating, but this one throws in a carefully placed pinch of something resembling science fiction and a creative twist on what could have been an average, predictable ending. 10 1/2 bugs.

The Big Lebowski – Jeff Daniels and John Goodman play dead beat bowlers, who are the two best characters I’ve seen in a film probably ever. There are so many hilarious things about this movie, I don’t want to start to go into them. But the film’s merit can come from their dialogue and interaction alone. After you watch the movie 4 or 6 times, you start to notice it’s actually a very cleverly written murder mystery in the shape of a comedy, which is rare. But you needn’t follow the plot to enjoy this film. And Ann Jillian gets naked, in case you’re into that. 10 bugs.

Forrest Gump – OK. We’ve all seen it. I wouldn’t normally pick such a front-runner, but I loved this film. Robert Zemeckis did an excellent job directing this film, down to the wedding scene in which everyone was seated except one individual, Lt. Dan (who had no legs). I’ll forgive him the 3-point line in the gym when Forrest was delivered his release papers. 10 bugs. 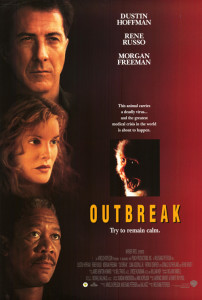 Outbreak – Dustin Hoffman and Cuba Gooding Jr play army men whose job it is to find viruses and kill them before they kill society. Well, one such virus arises and threatens to do that exact thing. Dustin, Cuba, Morgan Freeman, Donald Sutherland, Kevin Spacey, and Rene Russo do an excellent job of making the writer’s characters very believable and their actions congruent with the excellently scripted plot. Lots of action, lots of thought-provoking drama, and a little bit of funny when needed. 10 bugs.

Back To the Future Series – Well, I couldn’t go without mentioning this series. Now I never got into Star Wars and Indiana Jones comes pretty close, but I just love the whole concept that they got away with here. I think the first one is the movie that I’ve watched most in my lifetime, in case that ever comes up in conversation. When you watch the series enough, you begin to see how it starts to make fun of itself and just has fun. I know I mentioned Jeff Bridges and John Goodman earlier, but in retrospect, I don’t think anyone will come close to Doc’s character. The series isn’t without its flaws (though I’ll challenge anyone who thinks they’ve found a plot inconsistency), but I cannot give it less than a 10-bug rating because of the history I have with it. 10 bugs.

Beautiful Girls – I originally didn’t want to watch this movie because it had a stupid title in my opinion. It still does, but now that I’ve seen it, I have a lot more to base my decision on. This film is probably closer to a documentary about my life than American Pie. A high school reunion brings a long lost friend back to the old neighborhood and the first thing they start talking about is chicks. This film addresses relationships like Parenthood addressed family matters. And all through it, the guys always remain inseparable friends. This also started my love affair with Natalie Portman, who plays an unusually mature 13-yr old who confuses Timothy Hutton in his current relationship. No comments, please. 10 bugs.

I was sitting around at Mike’s a few nights ago, and during a card game, he decided to try to cut open a dented ping-pong ball with a serrated knife in his hands…

At least he was planning ahead for his stupidity. That’s learning on some level.