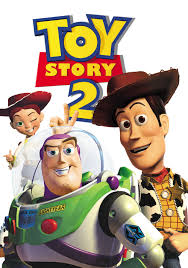 Now it might sound like I’m a bit biased here, but please put some things that you know about me aside for the moment. Like the fact that I act like a kid so much that I run a day camp in the summer and the fact that I like Pixar animation so much that I grade all movies based on how they stand up to A Bug’s Life. Also, I was a film major and took several animation classes, but anybody can appreciate how complex and tight this animation was. I guess I’ll start with how good the animation was. It’s every bit just as good as anything you’ve ever seen before, including the first Toy Story and A Bug’s Life. There’s a dog in the film that moves just like a real dog and every camera pan looks genuine. I don’t know about the movement of toys as much, but I imagine that’s what they would look like.

But even more impressive than the animation, which I had already assumed would be awesome, was the story. It was hilarious! From the first shot to the last, I was cracking up constantly. And I wasn’t alone this time, so I had to really muffle my laughter often. See, Pixar had already established itself as an animation powerhouse, so they didn’t need to defend themselves in that area, and we had already been introduced to all the Toy Story characters, so we didn’t have to waste time on character development. Instead, the movie just went straight into the plot, which was one of the most original and funniest I’ve ever seen. It does a lot that most movies that don’t involve the literal “animation” of inanimate objects can’t do. That fact automatically gives this film an unfair
advantage in the “original plot” category. But they used it. And very well too.

If you haven’t seen Toy Story 2 yet, shame on you. You don’t have to be embarrassed about liking a G movie without the comfort of going with a child. Most kids wouldn’t get a lot of the subtle humor in it anyway. All said and done, I am giving Toy Story 2 10 1/2 bugs. It’s hard, in fact, impossible in every way to compare it to Sixth Sense, so I’m not going to. And get there on time because in addition to the 5 regular previews and the dancing popcorn film they show you, they give you a 5 minute sneak preview of their next venture, Dinosaur, which looks incredible. And they show you they’re first ever film, which is a 5 minute flick involving a bouncing lamp. But after the actual movie, they’re done, so remember to go home.

This quote has nothing to do with Toy Story. Drew was complaining to me about how he had been up all last night because he spent the entire night at Julie’s watching 5 movies. I called him an idiot many ways over for about 10 minutes before he even got a word in edgewise. I asked him if he just wasn’t able to get home or if he did this by choice. He replied that Julie said she could take him back and Amanda said she would have also given him a ride later on too…

Well, I guess we know who drives the car in that relationship.