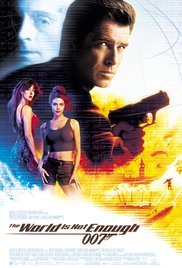 I was driving home last night after work at 10:00 and I was in the mood to see a movie. I wasn’t currently with anyone and nobody I know lives on 175 between Fridays and the Snowden River Shopping Center. So rather than cower in fear of being seen alone, I figured “what the hell?”

I watched a movie in a public movie theater by myself. And by myself is exactly what I was. I was literally the only person in the theater. I figured somebody would walk in by the time the credits were over, but I sat alone. It was very serene in a way. I didn’t feel the need to hold back when I wanted to laugh hard and had there been a real sad part in The World Is Not Enough, I might have felt uninhibited enough to let go. But there wasn’t. I think the coolest part was when the manager came out to ask me if I wanted to leave and get a refund. No, I’m fine. But thanks for asking. Actually, he was probably losing money by projecting the film. Oh well. The projector switcher missed his mark by like 6 seconds and some guy came up to me asking if I minded if he started sweeping up yet. OK. Now I’m just making shit up.

Well, I saw The World Is Not Enough, the newest of the James Bond series. Mind you, I am not a huge Bond fan and I’m not a huge Bond hater. I’m actually not very huge at all. So I’ll apologize to all Bond fanatics, if there are any, for my ignorance. It seems that all Bond reviews start with a critique of the Bond’s performance as compared to Sean Connery’s. Well, having seen at least one Bond film with Connery, Moore, and Dalton (I missed the George Lazenby’s “On Her Majesty’s Secret Service,” but I hear there’s a reason he only did one), I can say that I think Pierce Brosnan is an excellent choice for Bond and if he isn’t better than Connery, he comes in a close second. He’s young, good looking, can talk with a British accent pretty convincingly, and doesn’t have any visible body piercings. No pun intended. He was very subtle, he let the action and the lines do the work. And Denise Richards is the perfect Bond girl. That’s precisely what they are supposed to be about. Just a tight little body to strut around and tag along for one film in a 20 film series and give Bond somebody to play with when it’s all over. Being as though I was completely alone, I actually tried to follow the plotline. I understood it and it made sense. And the action sequences were as creative and thrilling as usual. All in all, I liked it and I’d definitely go see it again. 8 1/2 bugs.

I was in a car coming back from Baja last night with 4 people I didn’t know. Well, the conversation somehow got turned to how the guy lost his virginity to his babysitter back in the day. Something was brought up about how his parents were paying money for her to come over and… to which he said jokingly “Babysitter, prostitute, same thing.” Well, one girl in the back seat got very defensive all of a sudden…

“Hey! We are NOT the same as babysitters!”
-Some girl named Crystal

Who the hell names their kid Pierce?

Shaken, but not stirred,
Agent 00Whistlehead.