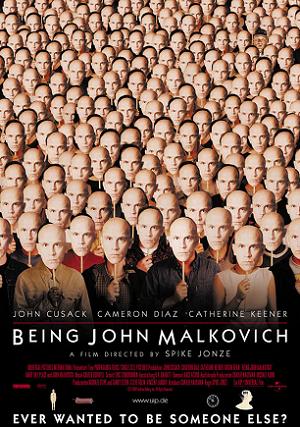 It had been almost two months since I’d seen a truly f*cked up movie (American Beauty), so I thought I’d treat myself to Being John Malkovich while I had the time. Actually, I take that back. Fight Club was more f*cked than the both of them. But as opposed to Fight Club, which was bizarre in form, content, and every other way possible, this film stuck to your pretty standard film-making techniques. There are small glimpses of a nonsensical abstract world, but Spike Jonze (the director), never lets the audience completely fall into it. But be prepared for one of the screwier storylines you’ve even seen. First of all, if you’ve heard that Cameron Diaz was in the film, you were lied to. Her much older and uglier sister is in it. I won’t say too much about the plot, because I don’t want to ruin it, but early on in the film, John Cusak discovers a hole in the back of his office that is actually a portal into John Malkovich’s brain. That’s how the movie went. Throw in a few loosely defined relationships and some truly out of left field plot developments, and there’s the whole storyline in a nutshell. And obvious as it sounds, John Malkovich is what really makes this film work. The enigmatic actor acts as himself acting as himself and sometimes as himself acting as someone else. I’m glad I didn’t think about it this much while watching it. I’d probably still be dizzy. And everybody else in the flick did a decent job, but Malkovich was funny as hell, and it’s nice to see him throwing punches at himself. Literally. I liked the film all in all, but I did feel it drag here and there. Or maybe I was just too damn tired. It’s hard to tell anymore with my 10 jobs and all. But I do know it was good. And original. And quite possibly the most off the wall plot done in the style of a “normal” drama that ever existed. And it worked. 7 bugs.

I just noticed that I haven’t yet mentioned that I got pulled over by the cops in New Jersey while coming back from the movies with half the volleyball team in my car. I would like to take this opportunity to once again voice my discontent for New Jersey roads, applying to both the individual roads themselves, and the road system as a whole. Very specific conditions have to be met for you to be able to make a left turn in this state. There have to pretty much be no cops around. There, that’s pretty specific. I’ll explain more later, but I really want to be done typing soon. Anyway, he pulled me over and I had to get out of the car to answer a few questions and then he decided he was going to let me go after he searched the vehicle. This apparently involved him frisking my middle hitter. I was telling this story to Geoff and Stryker and Geoff chimed in right at about this point…

“He frisked your middle hitter? Is that some sort of euphemism for your dick?”
-Mr. Geoff

I’m just glad he didn’t try anything with my defensive specialist.

Bonding with my team,
Coach.