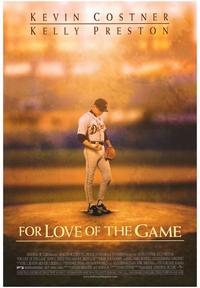 Well, I’m biased in both directions as far as this film is concerned. On one hand, I always love a good sports film, but on the other hand, I disagree with Kevin Costner getting in another baseball uniform unless he wants to do it as a manager. He was already old when he did Field Of Dreams, and that was 10 years ago. Actually, I just found out the man is only 44. I guess the receeding hairline thing he has going on threw me for a loop. Now that I think about it, I suppose Kevin was a perfect pick to play an aging, on-the-blunt-end-of-retirement, burnt out pitcher. At least he would have been better than Bob Saget or Merryl Streep, who I heard were also being considered for the part. Personally, I think Cal Ripkin would have been the obvious choice. Well, I like how this movie took a Jerry McGuire approach to filmmaking. It was two completely seperate movies really. One was a movie about a guy and a girl and how they fell in love and shit. The other was an intense film about a man’s baseball career coming to an unwanted end. The plots crossed paths every so often, but you could really make two different movies by concentrating on one or the other or at least turning one down and the other up a few notches. Like treble and bass, I suppose. Well, For Love Of the Game, as it was, was a very good mix of both the treble and bass. One part chick flick, one part guy flick. The chick I was with liked the girly part, and the guy in me liked the cool part. Compared to Jerry McGuire, the sports part was a little more predictable than I’d have liked, but the girly part was much more tolerable (sorry ladies, but that “You complete me” stuff just made me think that the movie wanted to think it was much deeper than it was). So what is For Love of the Game about? Well, Kevin plays a pitcher toward the very end of his contract and career. (By the way, I now like calling actors by just their first name). The manager of Kevie’s team is selling the team and trading him to San Fran or something like that, unless he’s going to retire. The Kev-man doesn’t know if he wants to do this, so the game that the movie centers around is possibly his last game ever. The flick had some very excellently placed flashbacks, which made up probably 85% of the film as it was. The movie is really dependent on character development, which is good, considering it has, with few exceptions, a relatively predictable plot. But thankfully, the movie doesn’t have nearly as many independent clauses as that last sentence. But it showed us his relationship with players from other teams, some rookie-type guy on his team, and his best friend, his catcher. It was a very well-thought out film with respect to the placement of scenes and information in a very non-linear, non-chronological film. And I think Kelly Preston wanted something too. But it wasn’t constant dirty sex like in the beginning of Jerry McGuire, so I wasn’t paying too much attention. All in all, For Love of the Game was a good film. Very worth seeing. And it’s a good date movie because you’ll both like it (probably). Upon retrospect, I’m glad I didn’t go see The Sixth Sense with a chick because then I’d probably have had to talk about it afterward instead of just sit there in awe of how great it was. That’s why I like Joe. He’s always a good guy to just sit next to in awe. But I think I’ve traveled away from the point I may have been trying to make here. I’m giving For Love Of the Game 8 bugs. It’s got a predictable ending, but it is a very good screenwriting feat, nonetheless.

Alright, this quote came after a long night driving back home from Ocean City, NJ to Bridgeport, PA by way of Cheese Quake, NY (we missed a turn somewhere along the way)…

I think we’ve all been there. And I’m pretty sure I remember him leaving
sometime around noon.

For Love of the Bed,
Sleepy Cricket.