Inside the Head of a Performer III – Part 3
Logic, Luck and Love 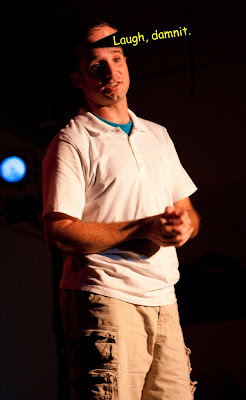 ntrast of relationship theory – lovey and hopeful. There was a part in her piece when she made reference to me in fact, and I didn’t even realize it for the first couple performances. Truth be told, I was happy to be done and sit down for a few minutes at that point to shake out all the poo nickels that had built up over 2 months of prep and half an hour backstage. Molly explained to us that a “poo nickel” was a little piece of poo that came out when she got nervous, which flattened out to about the size of a nickel. I know. Just what I wanted to think about before I go on stage. And as nervous as I was and having to perform first, I was bound to have a poo nickel one of these nights. Maybe even a poo quarter. Or a Sacajawea poo.

Jenn talked about how she has been waiting for that perfect kiss. “You’ve probably been waiting too.” I thought she was addressing the audience. Turns out she has been turning over her shoulder looking at me each time. And by the 4th show, I figured it out and thought I would react to it. Subtle enough to not derail the story, but something. Just a shoulder shrug. Whatever. By the last show though, I had a plan. I timed it so that I’d be taking a drink at the time. I didn’t do a spit take or anything stupid, but the addition of either having water in my mouth or having to stop an action mid-stream with my eyebrows, shoulders and hands forming a question mark was enough to get a laugh where there was not one before. Huh. Acting. Who’da thought?

And she ended. “You’ve got to believe…” That was my cue. Second part of the “Statistical Probability Model.” It started with me walking very dismissively and directly in front of Jenn to drive home the contrast of our beliefs in geographical fashion on the stage. And to make me seem more of an ass. At least for now. This part was easier – only about two minutes long, but again without many laughs. I managed to squeeze out a couple here and there, but nothing consistently. There was a part of the piece where I had to drag out a sentence and build it up for a big payoff. Pretty important part of the thesis of the show. I believe that I did it well because it felt good and because Amy said it was good and she’s not the type to throw around back-patting compliments (which is good for a director) – but there were no laughs. And there aren’t supposed to be, but you can’t really gauge thought from a crowd without hooking them all up to electrodes and that likely would have distracted from the enjoyment of the show.

Then I hit my last line. I was talking about love being incomparable from person to person “coincidentally… much like pain.” That got my biggest laugh of the show thus far and I didn’t think it would. Again, when I wrote it about 3 years ago, I probably thought it was funny. But I had forgotten. Anyway, it was nice to go out with a bang. But wait! A false exit! Kevin suggested it and I had never done it before. I actually start to leave the stage and come back Columbo-style with “Oh, one more thing…” The following line got a decent laugh too, but I felt like I was stepping on my own material. Like I should just get out while they’re laughing. It felt like having a great flirty conversation with a girl, getting her phone number, and leaving. Then going back in, telling her you’re still having trouble getting over your ex, who she reminds you of, apologizing, apologizing for apologizing, and leaving again with several feet in your mouth. I didn’t want to go back to the bar. But the script said so. And it was a decent line. Maybe in the rewrite, we can figure out something for that part. Oh well. But now is the Molly and Kevin show. And more Jenn. And Kevin again. And Molly again. And Kevin again. I have bit parts during a couple of Kevin’s stories, but it will be another 15-20 minutes before I would be needed on stage again. Time to retreat and regroup. 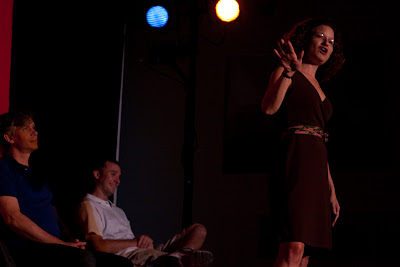