Last night, an old childhood buddy leaped right off the pages of facebook and landed with both feet firmly planted on the sta 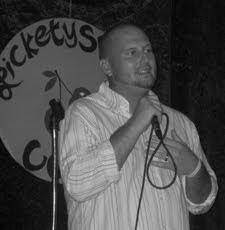 ge. Anxious to get this new hobby/career of stand-up comedy started, he picked a random open mic night out of a hat from a Philly-area open mic website and found himself at Lickety Splits on South St in Philly. And before I talk about how well he did, I need to briefly mention how horrible this open mic night was, and thus, how much harder his job was going to be for his first time ever on stage.

I’ve probably been to about 10 different open mic rooms in the past few years since I started doing this myself. Jerry asked if this was one of the worst I’d ever been to. No. It is the worst. And a poorly-run open mic room is a recipe for failure. Here are just some of the factors Jerry was fighting against his first time on stage:

OK, I’ll talk about how shitty this place was in a later post because I could go on for hours (apparently). Despite all the bullshit and watching half of the crowd that he brought to the show leave, Jerry delivered. After having heard his material the day before, I was convinced that Jerry the Writer’s stuff was good enough on its own that Jerry the Performer just had to transpose it from paper to vibrations in the air successfully and it would be fine. I had a couple tips for him about the order of his material and memorization tricks, but I thought his material was certainly ready on its own. But he rushed through it like he was trying to win a contest in rehearsal. Or probably more like he was trying to get it over with. I had confidence in every part of his preparation with the one concern that he may go too fast.

Jerry finally got on the stage after several unfunny people who were competing against a crowd that was taught to not pay attention gradually over the last hour by comedians like Omar and Damon. But thankfully he had brought his own crowd. And laughter begets more laughter. He started with one of my favorite jokes of his and it was the first time in a while anyone had really laughed. The first hurdle was cleared. But he had another problem. A heckler. Not in the “You suck” sense that everyone thinks of as heckling him directly, but when he would say things like “And now women have these tattoos -” she would cut him off with “I’ll show you my tattoo.” “I suck at picking up women -” “I’ll teach ya, baby.” Jerry does not need a heckler the first time up there. It definitely messed with the timing of the tattoo joke, but thankfully didn’t derail him from his material.

It’s always been part of my stand-up comedy values to never carry a set list or cheat sheet in stage with me, though some people do that. Jerry also wanted to do it without a cheat sheet and after seeing him do battle with a heckler, I was impressed that he never got lost. His material could have been slower still, but with all these other factors working against him, it was good to see that he remembered all his material and delivered it in a manner that had people laughing. If nothing else, it was good to get the first show under his belt. You’d think that would make the next show less nerve-racking, but it doesn’t. If I had to grade him based on all factors, I’d say it was a performance worthy of an A-. He still needs to slow down the delivery, but that will come with time. Lickety Splits gets an F though, or at least Damon does. I look forward to seeing Jerry soon enough in a real club like Helium so we can see him at a place that will give him a fighting chance at getting more laughs. And he’ll notice the difference. But he’s taken a very successful step in the direction to being a stand-up comedian. Money? We won’t talk about that yet. 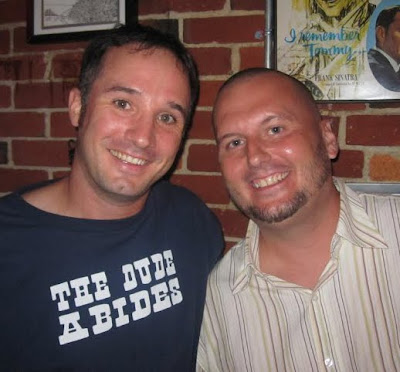