Inside the Head of a Performer III – Part 4
Logic, Luck and Love 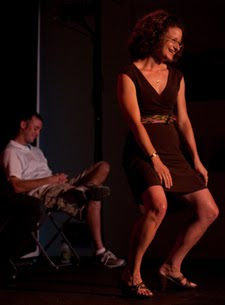 behind when the bus pulled out of Mixed Metaphorland has been well-documented. For the other four performances, this 15 minutes of non-stage time was a welcome break from the exponential tension that built up from the moment we were herded backstage half an hour ago. I would spend most of these 15 minutes scanning the audience for a victim (hot chick with blond hair, hopefulyl bleached and not very timid-looking) in the first two rows for my Brick Street piece.

I had bit parts in Kevin’s two stories, one where I had to sing, and one where I had to shout two movie lines in sequence with Molly and Jenn. In fact, the line I struggled with the most every night was my movie line. In the middle of a bunch of sappy lines from romantic movies such as “You had me at hello” and “You complete me,” I say “I see dead people.” The crowd always laughed, but I tried it several different ways – sarcastic, serious, lovey, eye-rolling and painful. I still don’t know quite how to say that line. But it gets a laugh just for being written into the show anyway, so I probably shouldn’t worry so damn much.

“What the hell is wrong with them?” This was Kevin’s last line and my cue. It’s fun time. This was the part of my quarter of the show that was put in because it was funny. I had written the first part (which was interesting, but more thought-provoking than laugh-provoking) and the last section (which was more moving than funny) first and then realized that I had relatively little funny in the show. And I was selected by Molly, Jenn and Kevin almost entirely for my reputation as a comedian. What the hell was I doing? So I made sure to throw in some funny. And at about the 20-25 minute mark of the show, it was funny time.

But it didn’t start strong. Not like Kevin’s. When we remount the show (which is apparently a theater term that doesn’t mean what it does in equestrian or porn circles), I may look to come out stronger. But this was my chance to bitch about Miami University and how it fucked up my head, especially with respect to dating expectations. The story was originally titled “The Reason,” as it was written to explain why I was so analytical and bitter. I used Brick Street as my backdrop and talked about a real incident that happened over and over for 3 years until I finally found the right mixture of good sense and discontent to motivate me to move back here.

This Brick Street piece was split into two parts, spliced in with Molly’s bar story of how she would try to pick up hot chicks 10 years her younger and get shot down. They were painfully similar. The first part was an explanation of exactly what goes on at Brick Street. I come out with a couple jokes about my age. Sometimes they hit, sometimes they missed. But one always got a laugh and it was probably the last one I threw in there.

Talking about the culture at Brick Street, I would say that I’d never seen so many shorts with words on the ass. I would bend over and point to my ass, as I had already turned around to talk about tramp stamps anyway. It was kinda cheap for this show, but I needed to interject some physical comedy into my portion of the show to get some more energy. I then stood up after pointing to my ass and said “I don’t know what ‘Pink’ is, but… I’m a fan!” And the cheesier I delivered the line, the better laugh it got. I found out later that the laugh was coming at my expense rather than at my delivery (See picture below). The line about this move being good for my ego… and also presumably my id – just wasn’t sticking the landing. But I thought it too clever to take out. I need to take my own advice and not fall in love with certain lines. 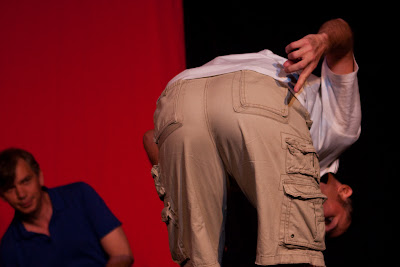 I realized my problem with getting laughs at this point in the show with material like that is that I’m not really an endearing character to the audience yet. And that’s by design which makes my character conclusion so much more meaningful. But it isn’t helping now. Especially not when I’m talking about girls in such a sleazy manner. For good reason, many of the members in the crowd probably didn’t appreciate this ass hole on stage enough to care about his trials and tribulations trying to score with women. Hell, I walked right in front of Jenn to start the show just after her “you have to believe” moment. I was made the villain. Oh well. Fight through it and get what laughs you can.

Then I got to talking about this culture that I wasn’t a part of, which was a person the audience could relate to. Though I did have a line about girls dancing with their hands “sometimes already on their ankles” that made Molly and Jenn cringe for real and they know me. In retrospect, this makes a lot more sense now. I talk about witnessing a guy go down to the dance floor and mimic him riding her from behind like a racecar seatbelt. I try to channel some of Kevin’s energy for this part. It gets a laugh, but not the one I’d hoped for. Nor does my “five-point harness” comment. Just throw it out, already.

So I come to a part where I have to try to figure out what to do in this town. Amy came up with the idea to pace around the stage like a mad scientist talking to myself. This went over awesome. The crowd is starting to identify with me more. And then I seek out that victim I’ve chosen while sitting in my seat for the last 15 minutes. And I stare at her. And I’ll tell you, it’s fun, but sometimes it doesn’t go well. Sunday night, I had picked the same girl as the first part, which I didn’t always do. She was equally uncomfortable this time too. Oh well. The show must go on. This isn’t about her anyway. I stare at her. I freeze. I slowly back up. Molly comes in hot. “I would drink 6 Miller Lites and approach the prettiest girl in the bar…” Still staring. Why not?