Inside the Head of a Performer III – Part 5
Logic, Luck and Love

Molly would be doing her thing on stage (and off stage for a bit) and I would still be onstage, but upstage 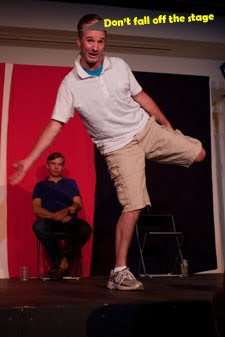 (which I learned means “backwards” among silly theater folk). I stared at that blond chick at least for long enough that I felt everyone was looking at Molly. She was pretty dynamic up there and garnered a lot of laughs, which was great. She also painted herself to be a jerk, but not the way I did because she had previously mentioned how she lost a lot of weight from when she was the “funny fat girl, like Natalie from the Facts of Life.” She went on to say it didn’t get her any dates, “but who did Tootie turn to when she needed a shoulder to cry on?” The mere alliteration alone should have earned her an applause break, but that line never hit like we wanted it to. Anyway, it was time for her to tag me in. And she did it in style. My two previous cues were Jenn’s “You simply must believe” and Kevin’s “What the hell is wrong with them?” This time Molly said “Pussy is finger-licking good. Call me.” It got more gasps than laughs, but they were fun gasps. She smacks herself in the head and fades backward as I stare back at the blond and creep forward.

“Blond – probably bleached – definitely bleached – which reeked of equal parts superficiality and insecurity… My favorite.” As I said this, I walked slowly toward the blond I picked out, always on the right side of the audience (stage right, that is – which is a theater term for “left”). I glance at a person on the left side of the audience for every aside I make, as if he/she was in on the joke. And that works well. I believe it starts to endear me to the crowd in a way. Which is what I need as I’ve just referred to the blond girl as a gazelle separated from the herd (And one performance, I actually referred to her as a “nightingale” by accident. Ha. Oops).

And then my mood changes when I have to impersonate a frat guy swooping in to pick up my mark. I try hard to make sure I’m as high energy as possible. I’m doing physical comedy, which I don’t really do much of on stage. I actually think it’s kind of cheap. But it works and I’ll take cheap laughs after spending the first third of my character arc being an analytical, dream-pissing on assface. So I go on to do what I called the “Douchebag Dance” where I grab my foot with one hand and the back of my head with the other and do the actual dance while narrating it with an obvious film of disgust on my voice. I get a decent amount of laughs while doing the actual dance, but my biggest laugh of the evening came every night when I was finished and I angrily yelled “And you know what?! That shit worked!” If this was a stand-up routine and I got a laugh like that, I’d have said “Thank you all! Good night. Drive safely” and walked off the stage. But that would have put the cast in even more of a pickle than Kevin did on Thursday. So I continued.

After the bit, I paused. Silence. Partly for laughter, mostly to change the mood. I put my collar back down, which I had popped talking about the Douchebag Dance. Stephanie (of Speakeasy fame) actually claimed that as a part she loved about the piece after her Opening Night viewing. And it wasn’t like she mentioned 37 things about the show. So I kept it in. And made sure to exaggerate it. But my favorite line (and Amy’s and Joe’s too) was next. After the silence and feeling my loathing for this situation I was in. “It seemed like hours had passed… Probably because – hours had passed.” It may have been my favorite line too. I found the humor was intact as long as I said it calmly the first time and EXACTLY the same the second time. It didn’t get my biggest laugh, but it was certainly passable. 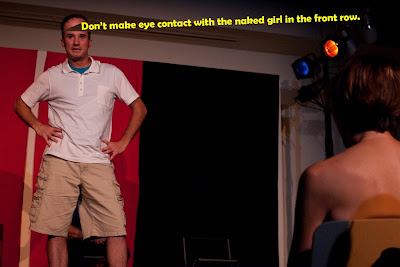 This original piece had about 4 or 5 different places it could end. We (Joe) decided to cut out most of them and stop right after the Wonka World reference. That bit normally goes over pretty well in my stand-up routine but didn’t hit as hard here for whatever reason. I make a reference to having a banana in my hand at the end of that bit as a metaphor for masturbation and that’s how it ends. With my hand grasping an invisible banana/cock. During the last performance, I decided to mimic throwing the banana away as I turned away from the crowd and went back to my seat. I did this mostly because I wasn’t ending as strong as I wanted to and wanted to think of something to fix it. I’m just not used to developing characters and not getting laughs. But it got a little extra laugh anyway. So I was happy. And I was also almost done. So I was happier. After all, the performance is fun. But the applause is better.