Inside the Head of a Performer III – Part 6
Logic, Luck and Love 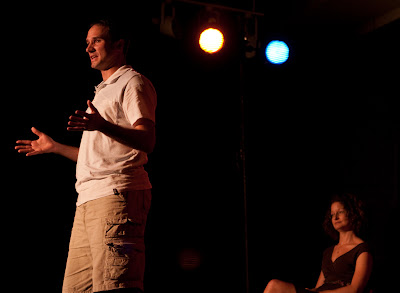 We’re deep into what a good friend would consider the “middle half” of the show. A lot of us are going through the arching part of our character arc. I just did my “I Hate Brick Street” piece and I’m about to get up to do my “Confused Narcissist” part, together which, I referred to as “The Reason” when writing, as to give myself some focus. My ultimate character arc isn’t necessarily one of chronology like Molly’s is. It’s more in the reveal of how I came to believe what I believe and showing that love and logic can coexist. But this next part is my turn. I talked of my logical approach to love and followed that with a flashback to getting my heart (and brain) crushed out in Ohio not from a particular lover, but from the lack of any at all. And so here comes the self-introspection I went through to get to where I am with the Statistical Probability Model.

But I had a problem. This piece, though introspective and a big turning point for my character, played itself out in a humorous way. But Jenn leaves the stage after her Back Porch story, which mirrors the depressing parts of Eat, Pray, Love (or so I’m guessing, as I don’t know because I’m a real man). She leaves the stage with “So I said goodbye… To him… to the roses… and to my vision… of the back porch,” which in this case represented her chance at long-term happiness. I don’t exactly want to come in with guns blazing and my piece isn’t as high energy as the last one, but I never felt comfortable with my entrance. This was complimented by Jenn actually asking me after our 4th performance to try to delay my entrance a bit. So she noticed it also. I don’t want to step on the feelings she’s creating either, but once again, the only real training I have as far as the audience is concerned, is knowing how to let them laugh. The depression they were supposed to be feeling was much harder to gauge. So I came in softer and/or later each time. To a completely silent and solemn audience. OK. Time to laugh again, people. Please.

So the deck is stacked against me. That’s fine. I know at least one line in here that will get laughs regardless of context. I try to ham up my introduction on occasion with a goofy smile followed by a furrowed brow on “…after all, I am the only common link in all my failed relationships.” Mixed results. I still can’t find a pattern with the crowd reactions and that is frustrating. I have a series of 6 questions that I ask and answer myself. There’s an order I try to follow but really as long as I end on #6, I can mix it up. Which I believe I did every single time without intent.

One of these questions is “Am I not funny enough?” I originally answered it with this long sentence about Dane Cook and Bill Cosby, but it didn’t really work in the first two shows and just ruined the flow. So I decided to try something on Wednesday evening. Instead I just looked at the audience and said “Please.” It was a risk, as I’m not sure if the audience really considers me funny. But they like me! They really like me! Success! It stays in the show. Molly even compliments me on it after that Wednesday performance.

There’s another question that I ask which is my only definite laugh line of the piece. “Am I not good-looking enough? Maybe not for some skanks.” 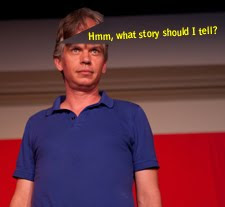 And then I pause briefly. The laughs usually don’t come until I start to ask the next question when they realize that was it. No further explanation. Just a casual shot at skanks. The line made Molly and Jenn cringe behind me as I found out later, but oh well. It got me some laughs and I was still in my transition from dick to likable dick. This was normally second in the order, but not always, as I mentioned earlier. But on Closing Night, I couldn’t access it in my brain. I did the first one (too picky?) and forgot it. No problem. I could go on to the next one and while I delivered that line, I was trying desperately to access that part of my brain. This was a first for me. I normally wasn’t prepared enough to think ahead while still talking. Steve Martin mentioned in Born Standing Up that he had done his material so many times that his mouth would be in the present and his mind would be in the future. That was happening to me now! This was damn exciting! Except I was coming to #6 and still hadn’t accessed it. That’s the bad kind of exciting. I had done the two that rhymed (money and funny) and was in the middle of #5 (good in bed). After I was done that one, I paused a little bit longer (only a second or two) assuming I’d remember it. But I couldn’t. Still didn’t until the show was over either and the gang reminded me. Kevin said he thought it was unprofessional to change my story like that. Get it?

The last question provoked the line “I’m a confused narcissist in this town…” The funny part was the explanation of what the term meant, but I occasionally got a laugh with just the term alone, which I need to credit to Dave Walker. In the revision of this piece, I probably cut out over half of what I had originally written with no complaints. The one argument I had was about leaving in the confused narcissist line. It turned out to be the only decision that I made in spite of Joe’s advice that panned out. I believe he still wins that overall battle, but I at least had one in the win column. Thanks, Dave. No dramatic last line, no false exit, just a three-minute journey over the hill of my arc. And back to my seat to mentally prepare for the emotional conclusion. Which I was apt to screw up because of the length. Time to study the notes in my head.