Inside the Head of a Performer III – Part 7
Logic, Luck and Love 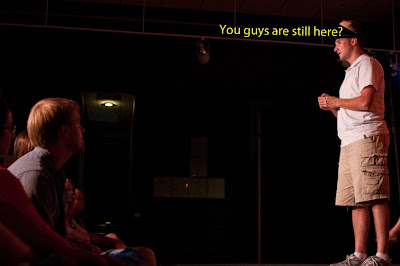 Joe told me that the first piece was the most important part of the show for me to get perfect because it was the show’s thesis. I don’t disagree by any means. But this last section I was about to embark on was the most important for me emotionally. I was chosen to end the show because my character arc was the most dramatic. I really wanted the crowd to feel my emotions. Truthfully, in the moments just before I was to go onstage again, I would think of Jenn (my girlfriend) and my piece ahead of time. I would look around the crowd to see Molly’s parents starting to tear up. I would picture my dad watching from the back of the room and how proud he’d be. Maybe it’s cheating. Or maybe it’s just acting.

OK. I worked my way up to be emotional. I don’t even really remember who was up right before me now but there was a music cue. Thankfully. Because following something as moving as “So I said goodbye… to my vision of the back porch” or as shocking as “Pussy is finger-licking good. Call me.” was wearing on me. Rihanna’s Umbrella. A favorite of mine since the Taubl Family did it on America’s Got Talent a couple years ago. I don’t know how the audience felt at the time, but the show was winding down and I just got that feeling. I opened with “I didn’t come here tonight to shit all over your beliefs… but, well here we go.” And that was the last real joke.

The rest of the piece was emotional with an analytic approach. And that’s exactly how I wanted to present it. So I stood in one place for the longest piece I had in this show and presented it matter-of-factly with emotion. It was an interesting dynamic. I got choked up at the part when I start to talk about Jenn (the girlfriend) and just let it come. I could have shut it out, but I wanted to show emotion. I even started to cry at one show. But it’s what I wanted to do to identify with the crowd.

The main point I wanted to get across is that I have run the numbers, they’re correct, and I was able to use them to figure out how to be happy. This was our story of origin. I talk about how we met because I decided I needed to move to “find a new them.” I go on to say that “I could pretend fate brought us together post facto if I wanted. Maybe it would help strengthen the bond we have. But it would also devalue all the work we have to do every day to make things work.” This was my closing argument statement. And I fucking forgot it on my opening night.

I sat down after being on stage for about 5-7 minutes convinced I had forgotten something. Meg Ryan? No. Compatibility points? No. Holy shit! I forgot the whole closing argument statement. I was thankfully still due to get up one more time after the other three had their closing pieces. I could skip it and go on or try to force it in somehow. Damnit. I needed to get it in. It would have been easier to forget it, but this was too important. So now I had a job. How was I going to find a way to get this part in?