Inside the Head of a Performer III – Part 8
Logic, Luck and Love 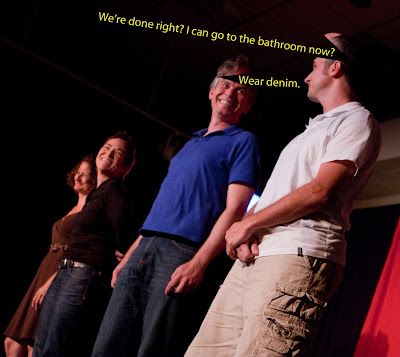 This was my toughest transition. Even harder than Jenn’s Back Porch finish. The end of the show was also the end of everyone’s individual character arcs. The end was bookended by my Mad About You piece. After I started the end, Jenn and Molly had their endings. One hopeful and one successful. Then it was Kevin’s turn. His ending was excellently crafted, as was his entire arc. He spent most of the evening making the audience laugh and really, REALLY knocked them on their ass with his ending. It was very moving and dark and honest. After spending his entire arc saying “What’s wrong with these people,” he concludes with an introspective “What’s wrong with me?” It’s touching and honest and a show-stopper. And I have to follow it.

My part is short. And uplifting. And will hopefully leave the audience hopeful with romance rather than solemn with despair. But I had to tiptoe into the darkness as to not overwhelm the audience with a change in tone. I also had created some extra work for myself on Opening Night by skipping a really important part during the first part of Mad About You. After figuring it out and stewing in my seat about it during the 10 minutes when the other three were delivering their end pieces, I had realized it was a pretty easy fix. This last tiny piece was basically two ideas. “It still takes work after finding someone” and “I don’t believe in most things, but I believe I will try to be the best person for her sake.” I had to fit in “I could pretend fate brought us together post facto if I wanted. Maybe it would help strengthen the bond we have. But it would also devalue all the work we have to do every day to make things work,” which I had forgotten from an earlier part of my piece. As mentioned, this was basically my conclusion, not just a throwaway line.

It thankfully fit very seamlessly into the end of the “It still takes work after finding someone” section. Looking back, it may actually belong there. But I wasn’t about to mess with the show in the middle of this week. So night after night, I got up and tried to let Kevin’s last words linger long enough for the audience to absorb them but not long enough so that they thought the show was over. And as moving as Kevin’s piece is, I don’t think it should be the end. It would certainly take our piece out of the “comedy” section just for the way we left the audience feeling. So I got up and brought the audience around to like this previously arrogant, cold and calculated character. Well, that was the plan. And I think I executed it well each night. As mentioned before, it’s pretty easy for me to get emotional. Honestly, I usually have to stop myself from getting emotional if I don’t want to during parts like this. So I let a little quiver come over my lips and a little glaze over my eyes.

And I backed away slowly to the rise of “Somebody to Love” and the audience lights coming up, along with the rest of the cast. An obvious indication that it was the end of the show. We got a standing ovation on Opening Night (and partial standing ovations in other performances). It was the greatest feeling of accomplishment and justification for all our efforts that we could have asked for. Until the review came out the following day. All the slaving we did over rewrites and the direction we got and the order we put it in – it all worked. Perfectly. No stand-up act I ever did had done what this did. Thank you so much to my great friends and fellow cast members for inviting me into this production. I only hope as we expand and remount the show that you consider me for the role of Dustin. Until next time…