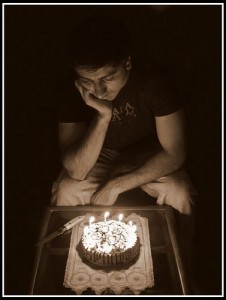 I apparently hate my birthday. I didn’t used to. Being a New Year’s baby was always a badge of pride for me. I never had work or school, people always remembered and “it’s always a party” I would say as often as I could stand myself hear it. My three best friends from high school would make it a point to come find me and bring in the New Year with the birthday boy.

But time marches on. The guys spread out around the country, the phone calls slowly decreased and the parties seemed more and more juvenile every year. But that’s not really the problem.

In addition to the already present anxiety of the calendar turning over, reminding us that the earth continues turning whether we’ve accomplished those goals or not, I also turn another year older. What used to be cause for celebration is now a dreadful reality that I have gotten old and that potential I had 19 years ago never materialized. Instead, it was wasted on convincing myself I was having fun and being too scared to pursue my dreams for fear of failure or more honestly, laziness.

I can’t watch Scrubs now without thinking of why I couldn’t have done something like that. I had that kind of talent, right? There were several non-family members who would have put legitimate money on me getting on Saturday Night Live. I find that I’m now trying to convince myself that I wasn’t that talented in order to justify the fact that I never tried. It makes my past decisions a little easier to swallow. And that’s probably one of the saddest parts of this entire process – that I have to pretend I was NOT as clever and funny as I thought I was in order to slow down the descent into depression.

I did something. I need to keep reminding myself of that. I did the standup thing when I was 32. Probably too late, yes. But I learned enough to discover some sleep aids. I could probably live my life a thousand more times, trying different ways out of the maze each time, and possibly never amount to what I wanted to be. I could get closer, sure. But I may have never reached the potential I thought I had. This helps a little. But once that calendar blows past Christmas and there’s nothing else written down for the rest of the year, it’s a very, very lonely week.

I think back to when I was at my best. And I’ve been good at certain things at certain times, but I mean as a person. When I liked myself the most. And that was college. I came into my own and found that I could be myself and have friends. I learned new things and I was good at most everything I tried. I hadn’t yet learned about sex so other things still mattered. I really liked myself then. And sure, we tend to romanticize the past, but it’s hard to argue about who I was then.

I’ve found myself driving by and walking around old hangouts recently. Parks where I used to play soccer, streets I used to walk down. Just to try to get that feeling back. Not to live in it, just to feel it for a few minutes.

And to answer the next obvious question – no, I don’t necessarily like the person I am now. I have lost touch with so many friends, I don’t do special things for people anymore and I’m stuck. I’m married now and just had a child. A child as wonderful and beautiful as her mother and everyone who has children and has met my daughter has assured me that she is indeed the best child ever. But thinking that her mere presence would reverse this downward spiral of self-reflection is a huge burden for her.

I knew I would grow up. I can no longer live that lifestyle I look back on with fondness, even before the wife and daughter. I have told my wife that she has made me the happiest I’ve been in my adult life. And that is true, but with an obvious caveat. The sad truth is that I’ll possibly never be as happy as I was when I was playing flag football by day and floor hockey at night, spending weekends overnight in the editing lab and playing spades, hearts and Magic until my 10am class on the weekdays. We can’t go back, Jack. We can’t. Nobody can. We just have to make this new reality the best we possibly can.

Like I said, I could go back to my 19th birthday, exactly half my life ago, and try a thousand different permutations of my life and still possibly wind up in this same relative position in every one. This is what I have to hang my hat on. Accepting that my baseline for happiness is lower and I likely couldn’t have done any better. I’ve tricked myself before and I can do it again. As long as I can get through this week every year. This damn, dreaded week with nothing on it.

But maybe I will. Maybe I will find enough happiness in being a father and husband. Maybe this writing thing will work out to a place that I can be happy about. Maybe if I start to make some more phone calls, I’ll start getting more phone calls. Maybe the sky isn’t falling. Maybe it’s just this fucking week. Shit, I bought a house and had a child this past year. Thanks, Jenn, for reminding me. As the doctor taught us, “unslumping yourself is not easily done.”

Nobody likes getting older. It’s just this rapid descent into nothing that scares the hell out of me. Once we get that new calendar up on the fridge, with all the new dates and possibilities, maybe then I’ll feel something. Hope. That’s what a blank calendar is. Hope. But I remember writing this same thing last year. And three years ago. Maybe one day, I’ll be able to write about something other than hope. Happy New Year.