There’s a lot going on in this movie. I understand why the critics didn’t get it. 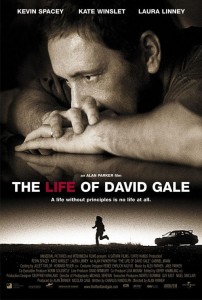 There aren’t many movies which got blasted by critics that I absolutely loved. It’s really easy to go the other way and hate something most people thought was good because all it takes is one thing. Like Seth Rogan for example. But there’s a short list of movies I really enjoyed that got under 30% on the Tomatometer and this is at the top of the list.

Most shortsighted people seem to think this movie is about the death penalty. OK, it is. But most critics seem to think that Alan Parker wanted to make an anti-death penalty movie. By this logic, I suppose Arlington Road is a pro-mass murderer movie and Sixth Sense is a pro-helping dead people movie. I thought he was just using the death penalty as a plot device and did so very creatively. If you’re projecting your own personal beliefs on the movie, that’s your bizness.

This movie had faux-bottom after faux-bottom and each one was more faux than the last. This part of the story is why the movie was written in the setting of Death Row, not because of any political agendas. Sometimes critics can be so critical. 9.5 bugs (out of 10).