The found footage film that Blair Witch never was. 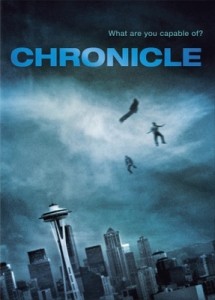 This is a movie that is allegedly shot using all omnipresent cameras, meaning that the characters in the story are aware of their existence. Most of the movie is some kid with a video camera, but they occasionally rely on a female video blogger to get them out of trouble. Props to the movie for sticking it through, even if it used some alternate ways around it with passerby cell phones and security cameras. It was contrived, but creative. And to put a cherry atop their crowning achievement, they called it “Chronicle.” As in “yes, we did it. We broke down that fourth wall and kept it down all movie, bitches!” Yes you did, but at what cost?

The plot moved along in very jerky fashion and scenes were often left unfinished because of this technique. But it was a much cheaper way to get the effects they needed, since they were already working under the premise that the footage was going to be grainy and unstable. Very smart.

The story involved three classmates getting super powers from some unexplained thing they found underground. OK. Moving on. Then these guys decide not to tell anyone else about this and they agree not to look up girls’ skirts. I’m calling bullshit. But hey, this happens in enough movies and maybe I just don’t really remember what it was like to be a teenager. Either way, the actors turned in very believable performances, especially my man Alex from Parenthood.

In the end, it was in interesting technique combined with the story they wanted to tell, but it had to fight too hard to stay true to their gimmick. 6.5 bugs (out of 10).