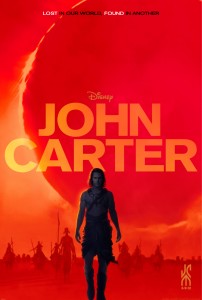 My wife went into labor at 2:30am on a Thursday morning and asked me to put a movie on so she could relax. “Really? The last movie I’m going to see before the birth of my child is John Carter?” was seriously the first thing that popped into my head.

I wanted to see why this movie got so blasted in the media. It couldn’t possibly be that bad, could it? Well, no. But it wasn’t great, either.

There were some very interesting parts with the aliens and John Carter’s superpowers on Mars. Which makes sense, should he be able to breathe the air. Kinda like Kal-El has here on earth. The scenes with the alien creatures were a lot of fun and I wish the movie explored those a lot further.

Then there was all this nonsense with McNulty and the human-looking people, which I assume were only there to give the movie a female presence. That part was stupid. Honestly, I can’t tell you what happened in the middle of that movie with her marrying the king or prince or if she was blackmailed or drugged or what – because I couldn’t pay attention. And yes, I watched it over again after we got home with the baby. Which makes it the last movie before and first movie after the birth of my daughter. Oh well.