Turns out this movie isn’t about Sallie Mae at all. It’s not even a horror. 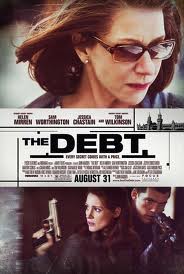 This movie buried the lead by advertising it as a Helen Mirren movie when it should have been the coming out party for Jessica Chastain. These two ladies play each other in a Frequency-type thriller that spans two time periods. Unlike Frequency, the past already happened in this movie, but it makes up for that by unintentionally confusing us with the characters.

The time jumps ultimately caused some confusion as to who was who and I’m still not sure I know what went on because of that, but it kept us interested, yet at arm’s length from the truth at all times until the movie decided it wanted you to know something. The film twists and turns and isn’t afraid to be vulnerable and show us protagonists who may have secrets and ulterior motives. More movies should have this kind of guts. 7 bugs (out of 10)