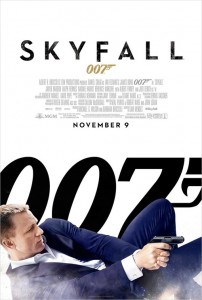 A Bond movie without a Bond girl? I’m apparently getting old, because I actually enjoyed that. Of course, it could also be the haunting memory of Denise Richards being forced into a square hole. Or any of the movies with Roger Moore.

I was granted work release from my 24 hour job last weekend by the C.F.O. who graciously took baby duty Saturday night so that I could be among the people again for a couple hours. It was the second movie I had been to since Mabel was born back in June, but I had already been grandfathered into being allowed to see the Dark Knight Rises, so this was a special trip.

Let me start where I should, with Javier Bardem, possibly the greatest Bond villain ever. In the interest of full disclosure, I have only seen about six Bond movies and I only remember two of the villains. And truth be told, I think one of them may actually be from an Austin Powers movie. But either way, Javier was impressively creepy, making us cringe with his story of rats, melted face, and homosexual threats. It was a different, heady level of creepy not normally explored by typical Bond villains. Or at least the fat Irish one I remember.

The film starts out in a hurry, grabbing the audience in the opening scene through the excellent action sequences and the drama of being told he didn’t have time to help a fellow agent who was bleeding to death. He showed brief pause, giving life to the character in as little time as possible, which is a credit to Daniel Craig. The scene ultimately culminated in him being shot and falling about 150 feet off a bridge, ending up in an Adele theme song. Eventually, he was on the run with Dame Judi Dench, who seemingly handed the baton to Ralph Fiennes for the next decade of Bonds.

Of course, there were silly parts where Javier could have killed Craig and vice versa, but lost their chance due to the need for drama, as is Bond tradition. But ultimately, the film replaced the usual exploding pens and sexually promiscuous supermodels with the 007 version of Rosebud and a much darker and more emotionally available Bond. And this filmgoer leans heavily in that direction, giving credit to those critics bold enough to even suggest that a Daniel Craig Bond may be the best ever. 9 bugs (out of 10)