Robert Downey Jr. said that he wouldn’t mind if all he played for the rest of his acting career was Iron Man and Sherlock Holmes. After Due Date, I don’t blame him. 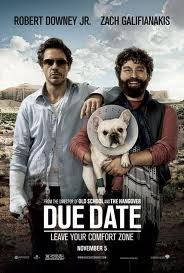 This movie was just too cowardly to call itself “Planes, Trains and Automobiles 2” because that’s exactly what it was, with Bob playing Steve Martin’s role and Zack Galifreaktastic playing John Candy’s role. This movie is another trying to capitalize on the recent zero to 60 fame of ZG, and it is quite obvious that a little Zack goes a long way. There were other things wrong with the movie, but the biggest is the amount of heavy lifting ZG had to do. He’s best served when he can have a straight man AND a wacky guy with him and all he needs to do is provide a punchline on occasion. Asking him to hold serve with Bob is not his forte.

It was formulaic, which is a word I’m tiring of, but one that fits this movie all too well. And I don’t mind formula all the time (hell, Pythagoras and babies love it), but I minded this one. There was a little heart in it when we find out about ZG’s dad, but the number of scenes where he was actually jerking off in the car (and told Bob about it – who did nothing but roll over), or something of the like, outnumbered all the good moments.