I know. I’m late. Jenn and I went to an Oscars party last year and I for one, was excited to see the revived 10-movie nominee format. Later, after watching A Serious Man and Precious based on the Novel Push by Sapphire, Jenn suggested that we put District 9 on the Netflix cue so we could watch all 10 nominees. This was rather surprising because the first time I asked her if she wanted to watch it, she said it looked like the two worst movies in the world got together and had a child and beat the shit out of it (paraphrased). I was excited. I think I may have accidentally tricked her into suggesting this but I wasn’t about to feel guilty.

And so we watched all 10 nominees. By then, we had already heard all the hype about Avatar and saw The Hurt Locker undercut the biggest movie of all time. Neither of us had any love loss, as we both thought Up was far superior to either. So I decided to rank the 2009 Best Picture nominees from 1-10. And I asked Jenn to do the same, just because I like to get into fights. Then I checked Rotten Tomatoes to see how the critics felt about them. And here I present to you my findings as a completely unqualified movie critic. 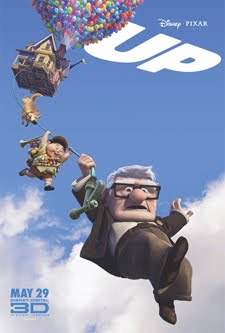 “But it’s a talking dog!” Charm, surprise and characters. Laughter, tears and romance. But mostly the dog collar that made the dogs talk. That did it for me. All movies, especially full length animated features, have their share of side acts and there have never been any better than the talking dogs in this movie. And Pixar was able to develop a relationship that made the audience care about it so much, about 98% of the crowd cried in the first 7 minutes of the movie. That was brilliantly done. And to this day, I’ve never heard anybody say anything about the little boy scout kid being Asian. Nobody. Weird. That’s how good the movie was. Seriously.

2. The Blind Side – It was a movie about football. REAL football. And Tim McGraw was in it. Maybe I’m grading on a curve because it’s based on a true story, but it was good. And based on football. 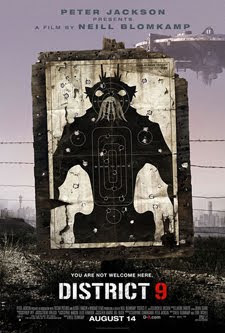 3. District 9 – This was the surprise of the year for me. This film was amazing. It started out as a documentary and ended as a narrative, but made an almost seamless transition between the two forms. It was impressive. Also, this was the first movie I’ve ever seen where there were aliens coming to earth and they were actually in trouble. They weren’t evil and trying to take over the world like we all thought. What a refreshing take on the topic. But this is where my love affair with Sharlto Copley started. If I had a hall pass from my engagement, this is the man I may go after. If I can’t get Portia de Rossi, that is. It was original, moving and clever and I have no idea why I ranked it below The Blind Side when I ranked them last year around this time.

4. Avatar – A lot of people liked to pick on Avatar for shit, mostly unjustified. It got a lot of crap for being a remake of the Sacajawea story. Didn’t the Coen Bros get praised for their adaptation of the Odyssey? Nominated for an Oscar even? Maybe if James Cam said he was doing remake, it would have been OK. And you could play that game with almost any movie. Hurt Locker: Guy loves his life-threatening job so much, he can’t stand to be with his wife and child and it ruins their relationship. Hello? Better get a good lawyer because David Simon did that first in the Wire. And Up’s brilliantly clever story of a disgruntled old man who loses his wife and falls into a deep depression and befriends a young kid to help him through it. Didn’t that already win best picture when Matt Damon and Ben Affleck called it Good Will Hunting? Avatar was, however, a three-dimensional movie with one-dimensional characters. But it was pretty kick ass, despite all that.

5. Hurt Locker – This was the best picture of last year. And it was good. But it was also slow and predictable. I fell asleep the first time I tried to watch it. Which isn’t horrible as I fall asleep a lot, but it’s not best-picture worthy. There were some very riveting scenes – one where he pulls the wire and 6 bombs surround him and another dealing with a bomb hidden inside a kid – but it felt a little slow in parts. And it doesn’t hold a match to District 9. 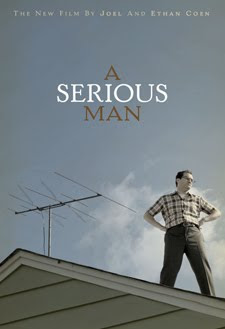 6. A Serious Man – This is the next Coen Brothers movie. Not necessarily a sequel to No Country for Old Men, but almost the same exact film. They have a knack for putting their main characters through the wringer and this is at the root of it all, a story about suffering and how to deal with it. I am not, however, Jewish – nor was I alive in 1967. And they stopped writing ends to their movies. They just kinda stop filming. They lucked out with No Country, but let’s not start whacking each other off just yet.

7. Precious (based on the novel “Push” by Sapphire) – Sadly, we as a nation had to say all that nonsense. Lots of movies are based on novel. Why the fuck do we have to qualify this one? I was pissed before I started watching it because of that. But then the movie got good. Mo’Nique, or however I’m supposed to spell her name (see, it gets confusing when you add shit that aren’t letters), was awesome. And not just for a female stand-up comedian. But for a real person, too. Seriously, she was good. And the movie, in its bleakness, was good too. Sad and over the top in parts, but a

believable look into what being raised in the hood is like for poor black people like me.

8. Up in the Air – For a few weeks, I liked to go around to people and ask them if they’d seen Up. Then when they started to answer, I’d say “in the Air.” They slouched. The excitement would leave their body. I had them at that moment. They were mine. Then I would kick them in the balls. That’s kinda like how this movie was. In other words, average.

9. An Education – This movie was the last one we’d seen in the batch of 10. It was well on my way to being in my top 3 or 4 about an hour and a half into it. Then the last 10 minutes happened. It went from a realistic exploration of the boundaries of having a relationship with a teenage girl (or an older man, depending on your perspective) to a cheesy uplifting Lifetime movie special in one stupefying scene. I was stunned. Like the last scene of Arlington Road, but for a much different reason. I couldn’t believe the movie sold out like that. It had something deep and meaningful and controversial. Then it all but came out and capped the movie by saying “stay in school and listen to your parents” Aesop-style. It was insulting and degrading. If I ever watch it again, I’m going to shut it off before that last 10 minutes happens. 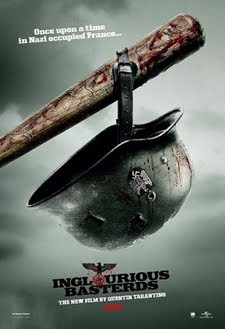 10. Inglourious Basterds – I’m done giving Quentin Tarantino the benefit of the doubt. I don’t know why he misspelled both of the names in the title. I don’t know why he didn’t translate certain words in the captions. I don’t know why he made this movie. I’m done. It was stupid. Sorry. It was stoopid. Certain dialogue was left untranslated at times and not in others. Like the word “oui” for example was occasionally translated to say “yes” at the bottom of the screen when spoken, but also occasionally translated to say “oui.” Why? Is he that bored now? Or that high with power? I didn’t much care for anything that happened in this movie, but if I was, I was too distracted by nonsense like that to care. Just retire already please. You made your two movies. Now you’re just embarrassing yourself.