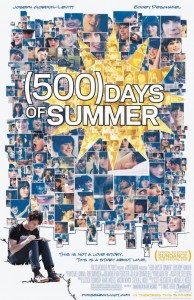 First of all, I’m calling bullshit on the title. Not because I know there are only [whatever 365/4 is] days of summer, because we all know that a gimmick. But because of the parenthesis. Why do you have to go and be so annoying to all the poor marquee people? Those parenthesis aren’t standard, you know. Most theaters have to draw them with Sharpees on packing tape.

Once I found out Zooey Deschanel AND Joe G-L were in this movie, I had to get it. Turns out it was a choice worthy of a consideration. It’s the story of a girl who doesn’t believe in love and the guy who falls for her. Been there. They replayed all the insecure and awkward DTR talks and the emotions they both go through. Neither is given the title of right or wrong and both progress and change and learn from each other. It was a very realistic look at a relationship between two people who get into one knowing they are going to have those bumps. It’s uplifting in parts and depressing in others, but it’s always real.

If you’re into seeing life the way it really is, I recommend this movie. If you’d rather see life the way you want it to be, check out It’s a Wonderful Life. 8 bugs (out of 10).