Is the preseason finally over? Can I turn the NFL Network back on now? 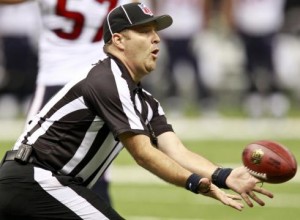 Every year, I make the same mistake. After seven months of football deprivation, I actually set aside time to watch preseason football, forgetting every time that preseason football is like eating cookies without sugar. They look so much like real cookies. And I like cookies. But they lack a crucial ingredient to make them into the delectable, edible wonders they created a Sesame Street character about back in the 70s. Sure, there are some flour enthusiasts among us that have 16-team fantasy football leagues to prepare for, and of course the bakers who need to know if there’s too much vanilla. But by and large, preseason football should be called something else, much in the same way sugarless cookies should be called flat muffins. I vote for “soccer.”

Still, it’s better than the other crap we have to wade through on NFL Live. Between the officials, MJD and Mike Wallace, I have to listen to 55 minutes of Adam Schefter talk about contract negotiations, holdouts and people who aren’t playing football before we get to the five minutes of actual football that has some relevance to the game on the field that we all want to watch. And yet, I still DVR every episode of NFL Live hoping the next one will be different. But it never is. Which is why I’ve been conditioned to stick a fork in my eye every time I hear Adam Schefter’s voice. Until this Wednesday. This Wednesday will be the batteries in the back of the junk drawer I’ve been looking for for the last 15 minutes. Finally. Now I can sit down on the couch with my double chocolate chip cookies, take the forks out of my eyes and watch a real football game.

Top Five things we learned from the off-season

5. Out with the old… What have you done for me lately? If your last name is Owens, Buress or Ochocinco (or used to be), the answer is “not enough.” We all saw Terrell Owens drop some literal balls on national TV and Chad Johnson drop some figurative ones on HBO, but it wasn’t that long ago that these three guys had defensive coordinators game planning around them. Let that be a lesson to you youngsters out there. Don’t turn 34. Also, props to Randy Moss for squeaking through the cracks. If I could name more than one wide out on the 49ers last season, I’d be more impressed.

4. Pain in the neck. The Broncos won a playoff game last year with Tim Tebow. I had to type that here to remind myself because occasionally I wake up in an alternate world where that never happened. After John Elway unceremoniously sent the highest jersey-selling backup in history over to run the trapeze act for the Rex Ryan Circus, he landed arguably the best quarterback in history. Last season, there were still fantasy drafts that were taking Peyton in the first round as late as the week before the season started. No one believed that he actually wouldn’t be ready to start. And it was a sad day when he didn’t. Because that means the penis-texting egomaniac will be the streak holder for a long time, possibly until Peyton’s little idiot brother turns 41. He can redeem himself by pulling a Joe Montana and taking yet another franchise deep into the playoffs. And given what little it took for them to win a playoff game last year, I’d say they have a decent shot at it.

3. Saints or sinners? Apparently, the new Collective Bargaining Agreement gives Roger Goodell the power to do whatever he wants. At least the penalties, however severe, were directed at the people who actually did something wrong, which is more than I can say for what the NCAA did to the Penn State community. But I’m not stupid enough to discuss that any further. David Stern-like full season suspensions were handed to a few people found complicit in the “Bountygate” scandal, and I’m still not sure I agree with it. On one hand, the league should understand that this is wrong and they sure made an example of the Saints. On the other, they never really did anything beyond the rules of the game. They didn’t put Ex Lax in the other team’s Gatorade or anything. If they hit somebody late or excessively, they were penalized. Same as any other team not paying their players to hurt people. And there’s a certain competitive advantage to knocking the crap out of people anyway, regardless of monetary reward. I’d be relatively interested to find out if there’s any correlation between those that think the sanctions were just and those that support capital punishment. When the Pats were fined and stripped of their first round pick for “Spygate,” Belichick responded by going 16-0, setting records out their cornhole while running up the score and giving the league the middle finger with regards to their alleged competitive advantage. Can the Saints do the same without their coach and defensive captain?

2. Officially missing you. I train officials for a living, so I know how difficult it can be, or at least how easy it is to make a mistake. We miss calls just like players drop balls and miss shots, yet we are for some reason held more accountable for our mistakes than the players are for theirs. In general, I defend officials because it’s so easy to assume we could be better than them when we see phantom pass interference calls and helmet to helmet hits go unflagged with the advantage of multiple camera angles and slow motion while eating Skyline Chili dip in our sweatpants. That said, I’m positive I could walk onto a field this Sunday and not be the worst official of the seven. I’ll forgive them for facing the wrong way and the microphone malfunctions as they’re not used to that stuff and it’s low on the list of things to get right. But knowledge and implementation of the rules should be secondhand by now, even if you came from the Lingerie Football League. I’m assuming you’ve watched the NFL before and know what offsetting penalties are and where the goal line is in relation to the five-yard line. The regular officials make mistakes all the time and because these officials are replacing them, the media and fans everywhere who think the NFL is too greedy will likely overvalue the mistakes these scabs are making. I’m not one to get in the middle of contract situations involving amounts of money I can’t even fathom and details no one really knows about, so I won’t take sides here. I’ve proved that I have no idea how far apart 47% and 49% is when talking about billions and billions of dollars during last year’s lockout. But essentially, the NFL has declared that there is a number out there that is too high to merit putting the best product on the field. Sure, the games will still be fair, but will they be safe? And will the rules be enforced any better once the games actually count?

1. …and in with the new. Remember when Peyton Manning started the first game of his NFL career and everybody thought the Colts were crazy? You’re supposed to let him sit on the bench and learn how to do things from the crappy quarterback he is going to replace. Like Brett Favre and Donovan McNabb and so on. You just don’t do that sort of thing. Well, now you do. I blame the success of Joe Flacco and Matt Ryan. Joe Flacco was the third string quarterback who only found himself starting because Kyle Boller was hurt and Troy Smith was sick. And he went on to win two playoff games his rookie season. Then Marc Sanchez did the same thing the following year. Now everybody is looking for that quick fix. There’s no time to lose. And with Cam’s success last year, it’s only going to get worse. Case in point, there will be five rookie quarterbacks and five sophomore quarterbacks starting this Sunday. The NFL has put its pop tarts in the microwave for three seconds, as it can no longer wait the entire minute a toaster takes. And why not? After all, there’s nothing sexy about starting Matt Hassellbeck.