Inside the Head of a Performer VI: The Big Show – Part 1
The E-mail

I proposed to Jenn back in September of 2010. Once we decided to plan the wedding ourselves to (unsuccessfully) save a little money, I decided to go on a performance hiatus. Because of how much anxiety I get and mental energy I give to write and rehearse each performance, I figured it would be best to concentrate all my mental energy and anxiety on the BIG performance, scheduled for May 28th, 2011. 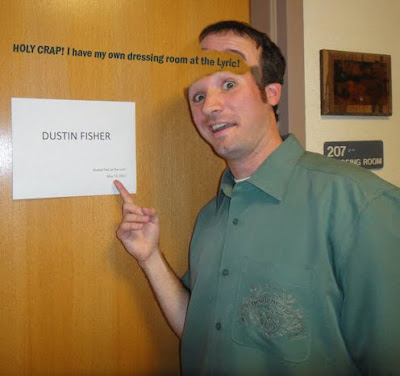 Many of my male friends would joke that I was taking it too seriously and that all I really needed to worry about was showing up, and my fiancée would probably put somebody in charge of that too. I wanted to punch these people in the face. These are good friends of mine. And I really wanted to punch them in the face. If I heard one more of my married guy friends tell me that “Lauren’s had this wedding planned since she was six” or “Kelly’s mom basically did everything,” I was literally going to make a ball out of my fingers and throw it in the direction of their face. And then when I would have to turn down an offer from the unmarried majority of my friends by saying something like “I can’t do car bombs at Tommy Fatso’s roof party tonight, I have [insert wedding bullshit] to do. And it’s Tuesday. And I’m an adult,” the unmarried majority started barking the same hilarious generalities they’ve heard from hack stand-up comics and formulaic romantic comedies. That time I actually did punch somebody in the face. With my mind.

The point is that I was taking a scheduled break from performance. I made an exception for the Logic, Luck and Love Valentine’s Day performance at Atlas because when a con man offers you magic beans, you buy them. And though I was tempted by several Dustin-friendly themes at the Speakeasy and concerned about a nearly year-long on-stage storytelling absence for my casual fans, I stayed the course. I certainly didn’t need to worry about doing another 5 minutes at a stand-up open mic night any time before the wedding. And I was right.

On Wednesday, April 13th at 3:33pm, I got an e-mail from Brittany Trombly of SEB, who I could pick out of a lineup, but would probably never have to. The e-mail basically offered me more money than I’ve ever gotten to do a longer set than I’ve ever done in front of more people than I’ve ever performed in front of. I hadn’t even finished reading it before I had already given myself an ulcer on the inside of my mouth and shit not one, but an entire litter of kittens. I named them all Brittany.

Once again, another man with more magic beans. I had to buy them. Unfortunately, the event was May 13th, 15 days before the wedding and the day of the UB golf tournament. Fortunately, it wasn’t on my actual wedding day. Or worse, the day before. Because that would have started a huge fight I’m happy to have avoided. Also fortunately, the e-mail said “upon approval from the Artist’s management,” which gave my brain an out that would keep my ulcer from developing into a Stage 4. The Artist (capitalized like that in the actual e-mail) was Aries Spears. Because when you think of low-brow racial humor and impressions of rap artists, you think Dustin Fisher. I was positive Aries’ management wouldn’t want some “Have you thought about this social construct this way” white comic warming up his crowd. And I was wrong. They couldn’t have been more indifferent.

And so it was written. I now had about 4 weeks to develop a strategy, sort through all my material, create a set list, rehearse and rewrite. It was starting to get tough figuring out what was wedding-related or Lyric-related stress. Oh yeah, the event was taking place at the Lyric. Yeah. The 2,500 seat Opera House. But they only expected about 1,500. Whew!