Bridesmaids vs. The Illusionist 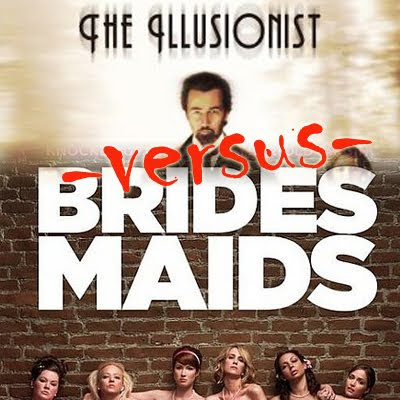 Title: Bridesmaids made it really easy on the viewer to remember what movie they were going to watch unlike The Illusionist, which was much more creative but easily confused with The Prestige. But it’s those kind of balls that get rewarded here on this website that no one will ever see. Point, The Illusionist (0-1)

Better Turn: Well, Bridesmaids had two turns and I hate when movies do that. Kristen Wiig was told she wasn’t going to be the Maid of Honor because she was a jackass on the plane. About 10 minutes later, she through a temper tantrum at the bridal shower and was told she wasn’t invited anymore. Just to drive that point home. Two turns = automatic disqualification. Point, The Illusionist (1-2)

Better Ending: They dug up Wilson Phillips from the grave to close out the cheesy wedding scene we all saw coming in Bridesmaids. The Illusionist, however predictable and formulaic, was at least not predictable, formulaic and cheesy. Point, The Illusionist (1-3)

Better Message: I’m really not sure anything was learned from either of these films. I appreciate the Rage Against the Monarchy Machine that The Illusionist presents, as well as the final scene where Ed Norton leaves his Peach Tree trick secret to Paul Giamatti, but I think the scene where Molly from Mike & Molly comes in to get Wiig out of her depression was the most poignant if I had to pick one. Because it wasn’t a good friend of hers, but somebody who knew what it was like for life to shit on them. Sure, let’s go with that. Point, Bridesmaids (2-3)

Better Acting: Ed Norton and Paul Giamatti are tough to beat. Especially Giamatti in this case, as he is conflicted between the monarch’s rules and his sense of right and wrong. Norton spends a lot of time whining with his face about his lovelorn state since his middle school girlfriend died. However, this was a coming out party for Kristen Wiig. I don’t really like female comedians all that much. Probably because I’ve never seen as many legitimately good ones as were in this movie. Ever. I am grateful that somewhere along the line, Kristen Wiig realized it was OK to make yourself unattractive for humor’s sake. Not a lot of women are willing to do that as regularly as she does. And she plays a great straight mumbling comic, sometimes just kicking the puck back on the ice for the other over-the-top actresses (mostly Molly (Melissa McCarthy), who came out with both barrels blazing). I really hope this is the beginning of a great career for her and not just a one-shot wonder. Point, Bridesmaids (3-3)

More Creative: My problem with The Illusionist is that it never explained anything. This magician could conjure up images of dead people and talk to them, but it never explained how. The Prestige had a far-out-of-this world explanation, but it made it make sense. It’s the difference between Back to the Future and Harry Potter. Back to the Future has rules. You need to get to 88 MPH to activate the flux capacitor. Random and ridiculous, but it bounds the science to rules. Harry Potter can do whatever it wants whenever it wants because magic knows no rules. So any plot twist is easy to write. Bridesmaids was by in large a simple plot, but Wiig’s underlying depression added something to the typical goofball comedy. Maybe if not for The Prestige, The Illusionist gets this point. Point, Bridesmaids (4-3)

Poster: I don’t really like either of these. That’s not entirely true, but I really don’t like the tag line “Nothing is at it seems.” Stupid. And Bridesmaids is just the 6 main characters in pink dresses against a brick wall. I like the “Save the date: May 2011” tagline, but it’s a boring image. Again, just telling us what the movie is about as clear as possible. I do, however, like the sepia tones The Illusionist uses, giving the 1920s feel to it. For that clever use of color alone, I’ll give that the nod. Point, The Illusionist (4-4)

Watch again: And in a race to 5, we’re deadlocked at 4. And maybe once again, The Prestige is going to come back to haunt The Illusionist, but if given the chance to watch one of those movies again, I’d watch The Prestige. Probably at least twice before I watch The Illusionist again. However, I am looking forward to seeing Bridesmaids again. Probably before I even watch The Hangover. That’s how impressed I was with the acting. Congrats, ladies. Point, Bridesmaids (5-4)

Overall: It was closer than I figured, since I really enjoyed Bridesmaids but could take or leave The Illusionist. Sorry Ed and Paul. You’ll get your due, I’m sure. And overall, if grading them on a bug scale, I’d give Bridesmaids 8.5 bugs and The Illusionist 6. Almost an upset. I’m sure it’ll happen sooner or later. And that will be the day I doctor some of the categories. Which I may have done tonight without noticing. 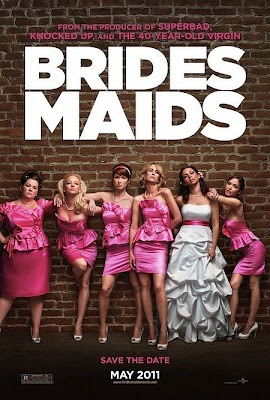