Remembering my college years has been pretty difficult recently. I made the mistake of staying at UMBC for an extra seven years to work, until I got “a real job,” which incidentally has yet to happen. Most of my memories of the days I was in school have been written over with newer memories of those last seven years, which is a legitimate function of the brain. If you park in the same parking lot for a year, you’re going to have a hard time remembering what spot you parked in six months ago. Your brain will discard that information as a defense mechanism, as to not confuse you. Now try parking there for 12 years. Most of those visual cues that I could use to unlock a memory lead to other memories of the more recent seven years. But thankfully, not all of them.

Last night, I stopped by UMBC on my way home with the intent to unlock some of those memories. And it wasn’t easy. I had to drive passed the Rec Center and Erickson Field where most of the memories from my working years reside. Erickson Field had effectively rewritten all the memories from the old Library Field and so much construction made it very difficult to recall the first years that I spent there. So I stopped at Susquehanna, remarkably untouched for the last 19 years, walked up the stairs and just sat on the landing. Something I hadn’t done in probably 15 years. And then I took a walk through parts of campus I hadn’t seen since my years as an undergrad. The walk to the dining hall, the field space behind Susquehanna and the other field space by Patapsco. These areas were thankfully somewhat protected from the overwriting memories of my years at the Rec Center.

When I first saw those big mirror-like doors at the entrance to the dorm, the memories started to come into focus. I immediately remembered that time that Laura didn’t really think I would actually shove my ice cream cone in her face so she called my bluff. She was wrong. I remember coming back from breakfast – probably the one time that I ever went – on the day I was up all night studying for finals only to realize that I had gone there in my boxers. That game of four square on the deck with people I didn’t know as well who were obviously ganging up on me, but I was able to hold my own. Sitting there and asking Kady how much money she would give me if I went up and just kissed that girl walking by. “Probably none. I might give her a few dollars.” I think she missed the point. Man, I wish I could have gotten inside there.

I walked to the dining hall and passed the basement of Susquehanna, where Mike Giese and I hit our blind 10 in our first spades tournament and coined the term “going to the well,” which would become a common phrase in our circle of friends. I learned Magic, spades and hearts and stayed up until the sun came up about every weekend night and sometimes during the week playing one or more of them. I would set the alarm for 6:30 on Saturdays and Sundays so I could make it into the dining hall before they closed for dinner.

And there was the dining hall. Another sacred area protected from life after graduation. So many memories came back immediately. Walking there in groups numbering in the 20s. Waiting for those 20+ people in the lobby. Moving tables around in all sorts of configurations to accommodate such a large group. I remember that group slowly dwindling in numbers with each passing year. I remember being forgotten by Shannon specifically and getting so overly-sensitive about it. And when she offered to stay and I said “You know you can leave if you want,” she took it the wrong way and got equally overly-sensitive. There was also the ravioli eating contest that thankfully most of the group missed the end of but heard about.

And then there was this other type of memory that was all too common. The one where I walked by a small corner of the dining hall and stared at it. “Something happened here. I don’t know what, but something happened here. And it involved Pat.” And that was it for that memory. Those were far too common during this walk. What used to be the field behind Susquehanna is now one of those temporary trailer-type buildings. The volleyball court next to it was heavily under construction. And Patapsco has expanded into the field that used to be over in that area. Not much outside of the dorm and the dining hall remained from what used to be. And that’s fine. It just makes the memories harder to get back.

Yesterday, the divine beings or laws of random chance that govern this universe took a person who was an integral part of those memories. Jenn Summers Barrett was part of this world for me. I got an e-mail from Shannon notifying me of her passing. My immediate thought was one of “well, this must be her mom or aunt or some misunderstanding,” because people my age can’t possibly pass away. But it wasn’t. My first question, which is the least important one, was of course “how did this happen?” As this would only really suit my morbid curiosity, I decided not to burden anyone who would know any details with this question. From what I understand after calling Shannon yesterday, some infection or virus came on quickly over a two week period. It’s sometimes amazing how frail the human body can be. Jenn was married with two little daughters.

So I spent most of last night inviting in memories of Jenn. I know we shared a love for Die Hard. I in fact, remember buying her the VHS tape of it and hiding it under her sink as a Hanukah gift. I remember at one point she told someone else I was handsome with short hair, so I never let it grow too long. I also remember her playing soccer at one point in time and running away from the ball when it came near her. And though I couldn’t really get a grip on any real substantive specific memories, I knew we were close at one point. Close enough for her to let me stay in her room when she was away for surgery for a week and my room’s AC unit was broken. And that was the day I slept through four classes and no one knew where I was to find me when I didn’t show up for my presentation with Marky Mark worth 75% of our grade. But that’s a story for another day.

I mostly remember her voice. I can still hear it today when I look at old pictures. Somewhere on the way to Fran Dresher but without reaching annoying status. And her hair. Long, dark and wavy. But the waves were not like most waves. Given a certain length of hair in which the average person with wavy hair will have 5 waves, Jenn’s hair had about 17. They were small and defined and there were a lot of them. And I remember that she was kind.

I lost touch with her around the same time I lost touch with everyone and for the same reasons. People graduated, met other friends, had kids, got married. The Tower of Babel had fallen. Adulthood had dictated that we couldn’t go to the dining hall 20-strong every night, and for good reason. We had responsibilities. And that’s fine. I don’t say any of this with any longing or regret. I love my wife and the life I have now and I tell her over and over that it’s because of her that I’m at a point in my life where I can honestly say that I’m happy for the first time as an adult. But it’s fun to visit this long-forgotten world once in a while and feel those emotions that I hadn’t felt in years. Back during a magical time when we were old enough to make our own decisions but still young enough to have hope. I enjoy the world that I’m in, but I enjoy visiting that other world, when a younger and much different Dustin Fisher ruled my thoughts and actions. To experience memories from a purer time. Back before student loan payments, employee evaluations and even sex. Back when other things mattered.

Unfortunately, these memories aren’t the easiest to recall for the reasons I’ve already mentioned. There is way too much stuff on the top of this storage unit to get back that far. I spent a better part of the last couple years trying to remember stories – writing them, performing them, etc. But there’s a huge hole around the years that I attended college. I’m thankful to have the memories that I do have. I just wish I could recall more of the specifics for when we talk at our annual Christmas Party, which we still have 40 strong attending, a stat I’m extremely impressed by. I’d like to be able to recall some of the actual events rather than just some vague recollections of people and tendencies.

And a lot of these memories aren’t even real memories – just memories of memories – a story recited over and over until I forgot why it was funny. I talk about that first weekend at college, running around campus at night, taking on the persona of Night Stalker, given to me by some of the fans of the X Men movies. But I don’t really remember it. I just know it. I can’t put myself back in that place. I can’t feel it anymore. And that’s a shame.

Thankfully, I got a little lucky. I have an ace in the hole. Since March 3rd, 1995, I kept a diary of sorts. Most people know this as the Quote of the Day. This was a daily e-mail that I sent out to the friends I spoke about in this long diatribe. And it lasted years. And I still have them all. I occasionally will glance through them, usually looking for something specific, but it has functioned at least serviceably well as a method to pry open a window to this world that I seem to have lost. These little entries can provide a little shot of nostalgia when I have the time and one day, I hope to upload them to my website to share them with those that would like to have a shot of their own on occasion.

The Native Americans believed in two deaths: the death of the body and the death of the spirit. The death of the body is just that. The heart stops pumping and the blood stops flowing through our veins. The decay of the earthly cells that make up our physical being. The death of the spirit is when the last story is told about a person. So as long as we keep a person alive in our memory and our stories, their spirit will live on. Maybe this is why I fight so hard for these memories. And so, years and years from now, when Jenn’s daughters are in college and they ask Tim about what life was like “back then,” her spirit will still live on. Jenn’s death is a tragic event that no words can capture. But it’s important to remember to keep the stories about her alive. The more we share a memory, the easier it is to access next time. And according to the Native Americans, the spirit lives on with those memories. You will be missed, Jenn. I’m so sorry. 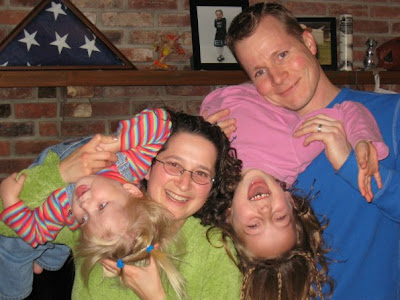