Das Boot vs. Requiem For a Dream 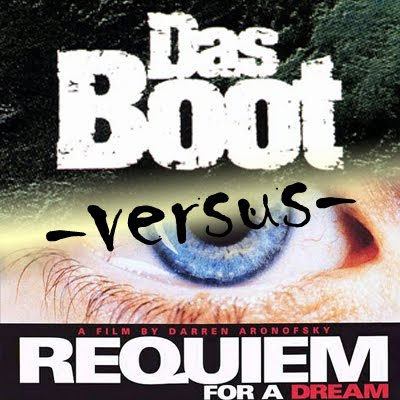 Hello! Welcome to the Round of 32! We’ve weeded out the crap and it’s time to get to business. Make the hard decisions I will one day get paid for. But until then, I will make these hard decisions here – for free – if for no other reason than to stave off doing anything considered productive by society. This includes joining Google Plus and figuring out what the hell it does. OK. What’s up, Das Boot and Requiem for a Dream?

Title: Das Boot is German for “The Boat.” I don’t even really know what a requiem is and that alone is better than a movie called “The Boat” in any language. Maybe if it was German for “Jelly Donut.” (Point, Requiem 0-1)

Funnier: Yikes! Everybody dies in both of these movies. But I’d say that the 3 ½ hours of Das Boot numbed whatever laugh sensors I had anyway. (Point, Requiem 0-2)

Better Turn: Both turns exposed the hopelessness of the situation. Dramatic as it was to see that the German crew had to go back out on a suicide mission immediately upon their return, the scene where the son tried to get his mom to realize she was addicted to diet pills out-hopelessed Das Boot. (Point, Requiem 0-3)

Better Ending: I just watched a really good movie last night called Das Boot. Ron: “What was it about?” It was a World War Two movie shot from the perspective of a German U Boat. Ron: “It didn’t end well, did it.” Not so much. But it did. (Point, Das Boot 1-3)

Better Message: “Don’t do drugs” vs. “Don’t mess with America.” Maybe not exactly like that, but that’s one takeaway. (Point, Das Boot 2-3)

Better Acting: Once again, Ellen Burstyn brought an unexpected thrill to this movie. I didn’t even know what the guys in the other movie were saying. In fact, how the hell did a German movie get to the second round? (Point, Requiem 2-4)

Poster: I’m not particularly affected by the giant eyeball. If they were going for disturbing, I suppose they got close enough to the target. Otherwise, the Das Boot poster, from picture quality to choice of font, shows a graininess and pixelated quality, which may just be the quality of the jpg, but is still enough to win this. I guess. (Point, Das Boot 3-4)

More Creative: The use of some creative camerawork and music along with the “Juice By Tappy” commercials made Requiem as uncomfortable to watch as Das Boot without having to be in German or last 3 ½ hours. (Point, Requiem 3-5)

Watch again: Have I mentioned yet that Requiem for a Dream wasn’t 3 ½ hours long? (Point, Requiem 6-3)

Overall: OK. We have our first Sweet 16. I wouldn’t exactly call Requiem an underdog, but mid-majors don’t usually escape the round of 16 too often. Good luck, Mason. 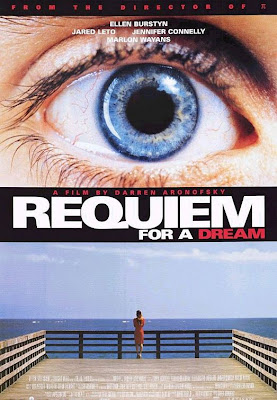