Stranger Than Fiction vs. The Rookie 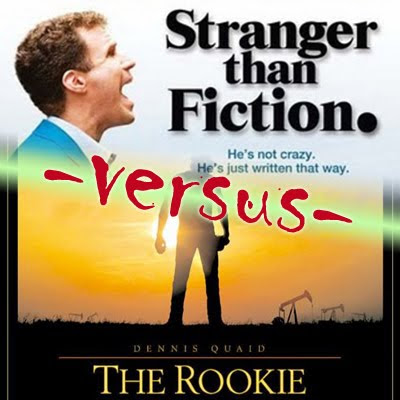 Seldom have two teams had more inferior opponents in the first round than Stranger than Fiction and The Rookie just had. Thankfully, I didn’t watch Shattered Glass and The Tourist back-to-back. Someone would have had to have technically won that diarrhea mess of a contest. Drink up!

Title: I like the minimalist tongue in cheek attitude of The Rookie. I also like the layers and layers of tongue out of cheek cunning in Stranger than Fiction. And I actually prefer my tongues out of cheeks, especially when followed by the word “cunning.” (Point, Stranger 1-0)

Funnier: Between the clever dialogue and the creative story, I almost forgot Will Ferrell is normally a dufus who falls on shit. (Point, Stranger, 2-0)

Better Turn: Last time I heard a voice telling me I was going to die, it turned out to be Char hiding in my closet. Not Harold Crick. More intrigue with this, though it was weird how Char was wearing a hockey mask and in North Carolina at the same time. (Point, Stranger 3-0)

Better Message: I’m not sure there’s a takeaway from Stranger Than Fiction other than “wow, that was cool.” Certainly not one that can compete with “It’s never too late to believe in your dreams,” as it says on The Rookie’s poster. Especially not in the eyes of someone balding and rapidly approaching 40. (Point, Rookie 3-2)

Better Acting: I love Dennis Quaid. Innerspace will hold a special place in my heart always. But Will Ferrell stunned the world by stepping out of his falling-on-shit persona to play this three dimensional character with a goal. Props to him. And not the kind you fall on. (Point, Stranger 4-2)

Poster: The sun is setting but it isn’t dark yet. “It’s never too late to believe in your dreams.” Silhouette of the star by himself. If this was 1995, it would be on my dorm room wall. (Point, Rookie 4-3)

More Creative: Not a great category to see come up if you’re a movie based on a true story about with four points against you already. Especially not against this movie. Sorry, Dennis. (Point, Stranger 5-3)

Watch again: I like me a feel-good sports story every now and then, but Stranger Than Fiction probably has another couple layers I’ll want to peel away sometime soon. (Point, Stranger 6-3)

Overall: Nice try, but it isn’t too often a Rookie gets to the Sweet 16 anyway. 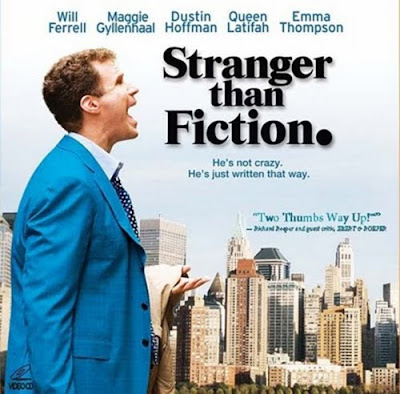