Bridesmaids vs. Body of Lies 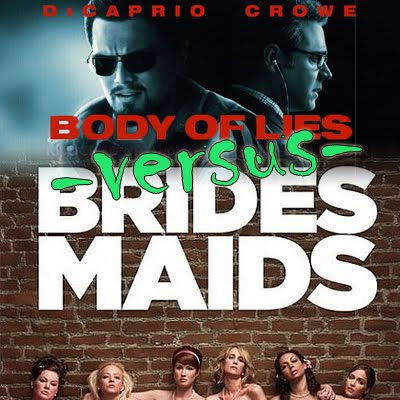 Boy meets girl. Boy loses girl. Boy gets girl back. This describes neither of these movies. Unless you consider Kristen Wiig a guy or the Jordanian intelligence a girl. Bridesmaids squeaked by The Illusionist based on the fact that it wasn’t The Prestige and Body of Lies beat up a documentary in at least three categories where it just needed to exist to get a point. In the immortal words of the Black-Eyed Peas, let’s get retarded!

Title: I’m just not going to go for movies that simply say what the movie is about. I understand the need for branding purposes, but you’re going to lose a point in this pointless contest. Sorry. (Point, Body of Lies 0-1)

Funnier: There aren’t a lot of movies that Bridesmaids isn’t funnier than. This isn’t one of them. (Point, Bridesmaids 1-1)

Better Ending: I’m as big a Wilson Phillips fan as the next lesbian, but I’m not going to defend the Hollywood circle jerk. (Point, Body of Lies 1-3)

Better Message: Ugh. Eenie meenie miney, hopefully it doesn’t matter because I refuse to think this any longer. (Point, Bridesmaids 2-3)

Better Acting: I do love how Kristen Wiig can dislocate her collarbone in the name if humor, but I occasionally forget how good of an actor Russell Crowe is because he’s a movie star. (Point, Body of Lies 2-4)

Poster: Yes, this movie has Leo and Russell in it. I’m not so sure that I didn’t just design this poster in my head thinking about the movie. That’s not a compliment. (Point, Bridesmaids 3-4)

Watch again: I feel like I owe Body of Lies another watch since I know I didn’t get it all the first time through. That said, I have a feeling I’m going to want to see Wiig and Melissa McCarthy and their fart and non-fart jokes when it comes out on DVD (or streaming Netflix if I’m lucky). (Point, Bridesmaids 4-4)

More Creative: Body of Lies wasn’t exactly Memento, but I’m pretty sure Bridesmaids is just a remake of The Hangover. (Point, Body of Lies 4-5)

Overall: Well, that’s an upset for those paying attention. For whatever that’s worth. Really, it just makes the road that much easier for Big Fish. Let’s be honest. 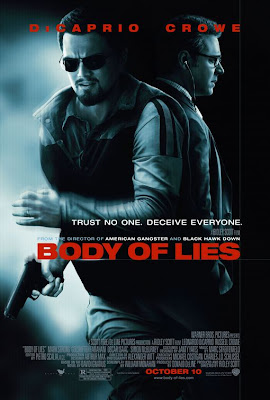