Requiem for a Dream vs. Stranger Than Fiction 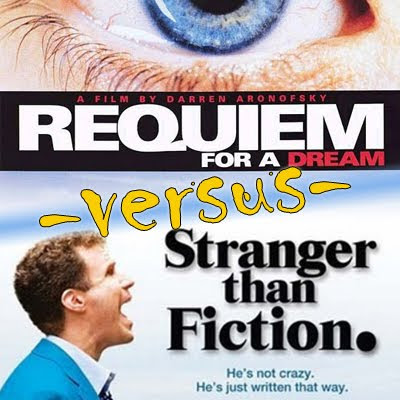 Two powerhouses of the tournament if the criteria was based on me not being able to figure out how to capitalize the title.

Title: Well, I looked up what requiem means. It’s still a cool word, but I think I liked it better when I didn’t know what it meant. Kinda like the word “prolapse.” (Point, Stranger 0-1)

Funnier: On his best day – trying to be funny – Marlon Wayans couldn’t be funnier than Will Ferrell trying not to be funny. (Point, Stranger 0-2)

Better Turn: Tough one. I do oh so enjoy Will yelling at the narrator trying to kill him, but I kinda knew that was going to happen. Requiem’s turn snuck up on me. Like the one on Northern Parkway to get to the lacrosse field. Trust me. (Point, Requiem 1-2)

Better Ending: Once again, a movie about an author that couldn’t figure out how to end her book imitates life. (Point, Requiem 2-2)

Better Acting: Wow. This one is tough too. I do so love Will Ferrell but I super love Ellen Burstyn. I didn’t really hate anybody else in either movie. Nor did I love them. I guess I have my answer. And it doesn’t look good for the favorite. (Point, Requiem 4-2)

More Creative: Mounting a comeback and needing the last three to win it, it’s nice to have a lay-up to get you started. (Point, Stranger 4-3)

Poster: Probably the weakest category for both of these films. But I still hate the eyeball and for some reason, I overlook it every time I try to find the poster. I suppose that says all that needs to be said. (Point, Requiem 4-4)

Watch again: This is as close as they come, folks. And on a different day, this answer might be different, which makes this question sometimes the hardest to answer. I’m thinking about sending back in both my Netflix DVDs and getting these two movies just so I can really let it play out. And as much as I’d like to see both of them, I think right now, I’d pop in – well it might be a coin flip which I do all the time. But I did watch Stranger Than Fiction twice when I had it. So I’m going to have to go with the favorite. And I really didn’t do this because it was the favorite, but I can see how you’d think that since I’m making the odds and reffing the contest too. You really don’t think I have the integrity to do this, do you? How vain do you think I am? Did you see Body of Lies get to the Sweet 16? This is why we don’t hang out more. Where was I? (Point, Stranger 4-5)

Overall: This was probably the first contest where I legitimately didn’t know who was going to win. Really, up until the last sentence, which I stopped typing to think about. Anyways, the better team won. And on to face the winner of Body of Lies and Big Fish (see, I kinda know how that one is going to end). 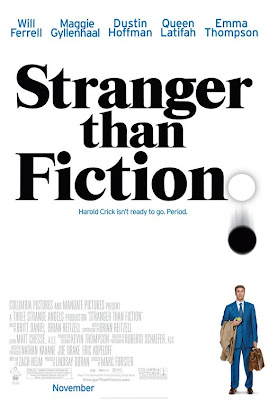