There is a new weird uncle in town called the “Total Quarterback Rating” that you’ll likely hear about throughout the season if you watch any show related to football on ESPN. 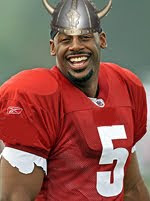 And much like your actual weird uncle, nobody can say exactly what it does. Everybody kinda knows and can regurgitate vague particulars like “it takes into account the down and distance” or “he does something with cars,” but nobody really tells us the full story because they think we’re stupid. And because it’s a broken and subjective system they don’t want exposed. But hey, it’s family. So it can come in and sleep on the couch. For a couple weeks. A month, max. But it doesn’t get its own key.

· Green Bay/Cleveland – Colt looks like he could be The Real McCoy in Cleveland. He’s not going to be The Real Brady, but he’s better than anything Cleveland has seen since they became the Ravens.

· Indianapolis/St Louis – The year that Brady got hurt in week one, Matt Cassell led them to an 11-5 season. That will not happen in Indianapolis.

· Buffalo/Chicago – There is just no way the Bills can make any game worth watching.

· New York Giants/Carolina – The Panthers have a very good chance of doubling their win total from last year. And their attendance.

· Minnesota/Tennessee – It’s not too often that two opponents get new quarterbacks totaling 69 years old and get 10 years younger in the process.

Seriously, Peyton better never get hurt. Not that we didn’t know that, but seriously. It’s not even worth paying for a backup QB. Put that money into cortisone and duct tape. Maybe a broom stick to shove up his back if need be.