OK. Calm down people. It’s just the pre-season. Shit, there’s a legitimate quarterback battle in Washington and not 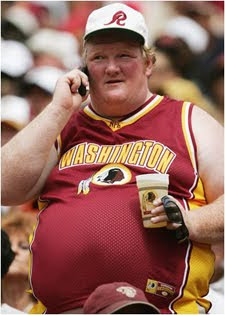 because both Rex and Beck look bad. The Colts have lost more pre-season games since 2005 than regular season games. There is no tagline for that statement. Just sit back and revel in the mathematical anomaly of it. The outcome of these games certainly doesn’t matter. The only reason for the season is for fantasy coaches to evaluate talent before their league starts. And actual coaches I suppose. So please – Washington – save the hope talk for the Obama reelection campaign. Don’t put too much stock into these things. Unless you’re an Eagles fan. Then you can shit your pants just a little.

What the NFL games taught us this week:

· New York Jets/Houston (from 8/15) – Even when Rex says boring company line shit, he gets the lead on NFL Live.

· Philly/Pittsburgh – If Mike Vick plays like this all season, people will start to remember the dog thing a lot more vividly.

· New England/Tampa Bay – The Patriots probably only need one day of training camp to be even with the rest of the NFL.

· Washington/Indianapolis – The Colts have lost more pre-season games since 2005 than regular season games. I felt I needed to mention this again.

· Carolina/Miami –SportsCenter does a really good job of fooling people into drafting Reggie Bush way too high in fantasy leagues.

· Detroit/Cleveland – I might give the Browns a shot at a dark horse wild card berth if they weren’t in the same division as the Red Sox and Yankees.

· Arizona/Green Bay – We all know Kevin Kolb was overpaid, but can you really put a price tag on hope?

· Kansas City/Baltimore – I just found out that Kansas City made the playoffs last year. Huh. How about that?

· Atlanta/Jacksonville – Jacksonville is a close second to Denver for the team that will most likely start three different quarterbacks sometime this season.

· New Orleans/Houston – OK Houston. I’m back on the bandwagon. Again.

· Oakland/San Fran – Two men were shot in the parking lot after this game. That’s probably how I would feel if I had to watch the whole thing.

· Buffalo/Denver – #1 selling jersey, #3 quarterback. Seriously, can we stop talking about him now?

· San Diego/Dallas – If the kickoffs were moved up 5 yards last year, San Diego may have won the Superbowl.

· Cincinnati/New York Jets – Plaxico Burress looks to be in playing shape again while the Bengals have shot themselves in the foot this year.

· Minnesota/Seattle – If I was Tavaris or Sidney, I’d have tried to sneak back on the Viking’s plane after the game.

Seriously, two men were shot in San Fran after the game because of their adverse opinion of which is the better team of the two. I don’t know why anyone would want to go to a game anymore. I don’t like to risk getting beer spilled on me, let alone death. Thankfully, this philosophy also falls in line with my philosophies of being cheap and not leaving the couch.