Stranger Than Fiction vs. Big Fish 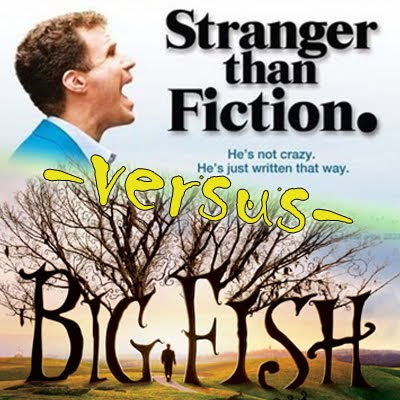 And in the No Surprises Here department, feast on the battle between two of the best movies I’ve ever seen. All bets are now final. And soon, a movie that I saw two months ago will be in the Final Four. I know. The system isn’t perfect.

Title: The decisions are already hard. I need to employ a panel of other people for the finals. I feel numb to these answers after the fourth time. Or I need to get drunk. But I’ve got to go with Stranger Than Fiction, despite Big Fish being one of my nicknames. Maybe people will start calling me Stranger Than Fiction. God willing. (Point, Stranger 1-0)

Funnier: See, Big Fish wasn’t really funny per se. It set a mood that was funny-like. And it was awesome. But not funny when compared to Stranger Than Fiction’s actual funny. (Point, Stranger 2-0)

Better Turn: When people ask what my favorite movie is, I say Memento. And then shortly after that, I say a close second is Frequency. BUT – after that – I mention Big Fish. Maybe after Back to the Future. Depends on the day. But the scene where Will Ferrell finds out he’s going to die just kicks you in the nuts. In a good way. Uh-oh. (Point, Stranger 3-0)

Better Ending: Yay! Here’s a point! It’s a shame Stranger couldn’t find a better ending. But it till wouldn’t have held a candle to Big Fish. Whatever the hell that means. (Point, Big Fish 3-1)

Better Message: Some movies are awesome despite the lack of meaning. Stranger Than Fiction is sucha movie. (Point, Big Fish 3-2)

Better Acting: I’m not the kind of guy to call a category a tie. Because that’s spineless and lazy. So what do I do here? I adore Will Ferrell and Dustin Hoffman, but there’s such a great dynamic from two distinctly different film genres. I’ll go with Big Fish for the degree of difficulty. There were characters distinct to one or the other (Ewan McGregor, Albert Finney), but some who also played in both (Helena Bonham Carter, really no one else) – and that’s good enough for now. (Point, Big Fish 3-3)

Poster: And the winner of the Big Fish award goes to… (Point, Big Fish 3-4)

Watch again: This category definitely does not favor movies I watch a lot. I watch Big Fish at least once a year and though I watched Stranger Than Fiction twice when I had it, it was so long ago now that I would like to see it again. And so it’s down to the last minute. Best of luck. (Point, Stranger 4-4)

More Creative: And it’s another toss up. I haven’t seen a movie like either of these to say “Hey, this movie is like [movie name], but with less annoying [adjective describing movie].” I’m leaning toward Big Fish because I love the movie and I know this is the deciding point, but I want to give Stranger its fair shake. So I’ve decided to employ a tactic I only resort to in emergencies. I asked Jenn. She said that the world that Big Fish created which drove the movie’s humor was enough for her. And that’s enough for me. Which better be enough for you. (Point, Big Fish 4-5)

Overall: Well that wraps up the Philadelphia Quadrant. And despite falling behind early in the game, the #1 seed came out alive. A valiant attempt by Stranger, but maybe we’ll find a bracket buster in the next quadrant. 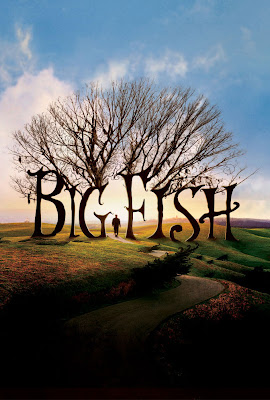