Planet of the Apes vs. Bee Movie 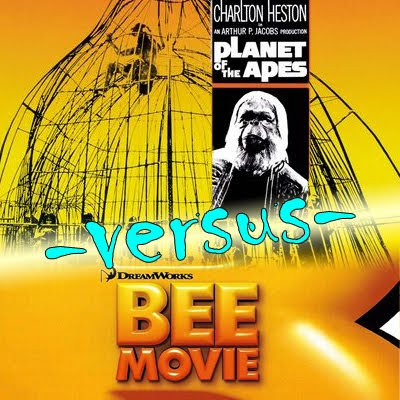 Bout #9: New quadrant of the bracket, new format. Each movie gets its own mini-review as a little foreplay before the raunchy doggie-style sex that is the Double Feature Duel.

Planet of the Apes: This is the 1978 version with Charleton Heston. I already knew the ending going in (the Statue of Liberty is actually on the current movie poster for this movie – which ruins it) and I knew how fake the ape costumes were going to be. That aside, I was pleasantly surprised at how well it delivered its social commentary while maintaining a degree of real action. Putting myself back in that time and pretending I didn’t know the ending, I would say it’s worth the 29 sequels and remakes. 7 bugs

Bee Movie: This movie started out pretty bad, actually calling out its own cheesy jokes – then it got interesting – then it tried to force a moral upon us and got stupid, confusing and boring. But it was moderately funny while I was able to pay attention to it. 4 bugs

Title: I know it was based on a book, but it’s tough to go against a term that has become such a part of our culture. (Point, Planet of the Apes 1-0)

Better Turn: The climax of both movies was finding out that humans could communicate with the animals from the movie title. But Bee Movie kept turning and turning until it got itself lost. (Point, Planet of the Apes 2-1)

Better Ending: The discovery of the Statue of Liberty is Bruce Willis’s realization that he’s dead for its time. And then Heston went on to damn mankind for blowing each other up rather than it just stopping with “It’s a Cookbook.” And when Charton Heston does it, it just feels more manly than when Al Gore does it. (Point, Planet of the Apes 3-1)

Better Message: I think Bee Movie was trying to say that we shouldn’t take honey from bees because it’s their livelihood. I’m not kidding. (Point, Planet of the Apes 4-1)

More Creative: This is tough. I find me asking myself which of these would I be less likely to come up with. However decent a story Planet of the Apes is, I think I could have come up with the main plot points. But a bee befriending a human, along with the entire opening scene with the action in the hive can get Bee Movie a pity point. (Point, Bee Movie 4-2)

Poster: The newer version of the Planet of the Apes poster shows the Statue of Liberty but that isn’t the original, or else it would have been really anticlimactic. The original poster was bright yellow with a sketch of apes in a cage with an ugly black strip in the upper right and – anyway, it sucks. All Bee Movie posters are better than this. (Point, Bee Movie 4-3)

Better Acting: It’s tough for me to compare a movie largely acted by people in bad ape masks (who randomly and conveniently spoke English, which I just can’t let slide) to an animated movie with no live actors. But I will. And I’m not going against live actors that don’t suck. (Point, Planet of the Apes 5-3)

Overall: 6-3. That’s as close to their bug scores as possible. The better team won. I think Seinfeld outthought himself a little too much with this one. 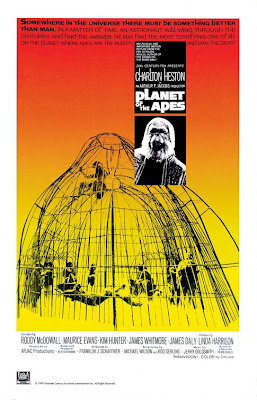