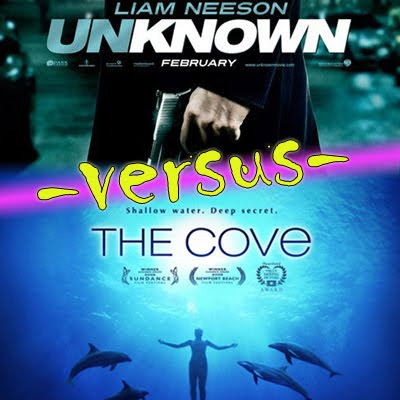 Bout #11: Another narrative vs. documentary story. So far the battle favors the narrative 2-1 (if I lump Shattered Glass, a based on real life story) into that category. Which I will. Because I can and mostly because I just did and I don’t feel like deleting it.

Unknown: Liam Neeson plays his character from Taken and gives himself some Bourne Identity-grade amnesia. Only he can remember some things but not other things, which is a very convenient trick used often in the writing world. It’s good, and I do especially enjoy the twist, but the movie couldn’t help itself and threw in some cheesy action car chases and lines of bravado that sucked it back down to Hollywood cookie cutter status. 5.5 bugs

The Cove: Wow. This was an incredible look at this underground dolphin mass murder that goes on over in Japan almost daily from what I understood. And for part of the movie, I thought I was actually watching a real life Oceans 11 in how they had to sneak in to get the footage. 8.5 bugs

Title: Unknown is a good title. Which is why 6 other movies are also named that. (Point, The Cove 0-1)

Funnier: Don’t go watching either of these movies expecting a laugh-out-loud moment, though I’d have to give the banter in the Cove a nod over Unknown, who seemed to take itself a little too seriously to let down its hair (Point, The Cove 0-2)

Better Turn: It’s hard to say where the action actually turns in The Cove, though it was shot a little more like Oceans 12 than your average documentary. Unknown also seems to keep turning, as we learn something new every scene. But I rather enjoyed the middle 15 scenes of the movie. (Point, Unknown 1-2)

Better Ending: When ESPN shows their top 10 plays, they usually don’t speak over the final play and let the play-by-play peeps do the talking. That’s kinda what The Cove did. It was obvious and easy and it worked superbly. (Point, The Cove 1-3)

Better Message: Don’t kill dolphins. And if you do, don’t lie about it. And if you do, learn what a fake rock looks like and steal the HD camera from inside it. (Point, The Cove 1-4)

Better Acting: Again, the yin to the Better Message category’s yang in the narrative vs. documentary battle. (Point, Unknown 2-4)

More Creative: The lengths that these documentary guys had to go to get the shots they wanted was straight from Oceans 13. Except this was real. And it worked! Better than it did against Al Pacino. (Point, The Cove 2-5)

Poster: Shallow water, deep secret >OR< Take back your life. Unknown just wanted you to know that Liam Neeson and two hot blondes were in this movie. (Point, The Cove 2-6)

Watch again: I’d probably watch Unknown again just for the scene with Bruno Ganz and Frank Lengella. But The Cove was really entertaining and if you can stomach the needless slaughter of thousands of dolphins – which I can – I would definitely see it again. (Point, The Cove 2-7)

Overall: The Cove was a special movie. A documentary shot like an Oceans 14 movie. Unknown is the second best movie with that title (See Jim Caviezel, 2006). Winner: The Cove (7-2) 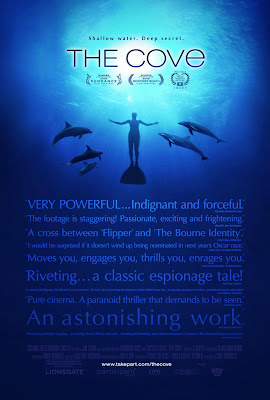