Review of Rise of the Planet of the Apes

First of all, we need to know what it is. Because we like to put things in boxes. Is it a sequel? A prequel? An equal? A fecal? 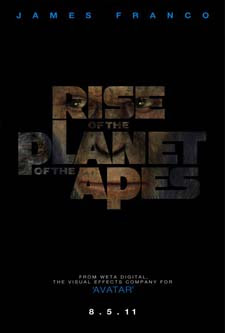 Well, those that were fortunate enough to only see the original Planet of the Apes with Charlton Heston would assume this to be a prequel, since it shows how the apes began to rule the humans. Those sadistic enough to torture themselves through the entire original 5-movie series would recognize this as an alternative version of the fourth movie, Conquest of the Planet of the Apes, which because of the time travel element of the third one, could have been considered a prequel OR a sequel. Sorry about your boxes.

But the next and more important question is “Was it awesome?” And the answer is yes. Very, and in many different ways. Apparently, you can take ultra-awesome CGI special effects and write a script around it. Both elements can indeed coexist in the same film. I hope the Transformers franchise was paying attention.

The film could have (and really did, for everyone born after 1970) exist on its own. But it’s brilliantly extended itself to the original series. It nods its cap to that series by throwing in some references to the originals. And not like the hackneyed bullshit “Get your paws off me, you damn dirty human” that Tim Burton did back in 2001, which was more of a mockery than an homage. From the ape’s name to his first word to his “Bright Eyes” nickname. It was all done very tastefully for those still alive to remember that original series.

But MAN, was it good. James Franco isn’t winning any Oscars for it, but he was serviceable as a lead. Though the real star was Caesar, the CGI-caked Andy Serkis, who gave this ape some legit emotions. And how about the clever storyline? For the record, Harry Potter fans, this is what makes good science fiction superior to silly fantasy flicks. It takes a believable concept like medicine that can rehabilitate brain cells (why the hell not?) and it makes something possible out of it. How stupid would this movie be if an ape just pointed his finger and said “Pamplonius Margonius” and all the humans magically had really debilitating dysentery all at the same time? Real stupid is the answer. I would have also accepted very, totally, and wow – yeah – you’re right.

I could poke a hole or two in this, like the overdramatized final scene, but it was still touching. I can’t find a thing wrong with this movie and I’m not going to try anymore. 10 bugs