Jenn and I went to watch J Edgar. It was sold out. We had to pick another movie or leave and have to talk to each other. So we reluctantly settled on Tower Heist. Well done, karma.

All the previews play this as Dumb and Dumber meets Oceans 11. I fully expected a stupid, Zoolander-esque 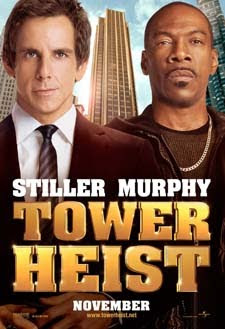 (still haven’t seen it) movie that should be in the background while I fold my laundry. In no world should I be paying $10 for food I wouldn’t eat on an airplane to watch this thing. Only it wasn’t. It actually tried to be a real movie. A Ben Stiller movie, but a real movie. And it succeeded. Up until the part where they pushed the gold-laden car out the 40th story penthouse without attracting any attention.

It started out with one of those formulaic fast-paced scenes showing all the different ways Ben Stiller could shit gold. Somebody needs Mets tickets? He’s got 2 behind the dugout. Somebody needs a good mud bath? He’s got dirt in one pocket and water in the other. Somebody needs a kidney? He’s O negative and was born with three. It gets us through the first act in about 10 minutes. Some of the jokes hit and some missed. Michael Pena was on one end of the spectrum and Casey Affleck was on the other, but I won’t tell you which was which. Also, I think I’m laughing at Matthew Broderick out of respect more than humor. Regardless, the characters were the best part of the film. They weren’t experienced thieves (save for Eddie Murphy’s 48 Hours roll reprised), but they weren’t Dumb and Dumber.

And there’s been a Tea Leoni sighting. Turns out she is still alive and living among us humans. I don’t understand why she isn’t in more movies.

But when the heist, the movie’s namesake, actually begins is exactly where the suspension of disbelief ends. Cars dangling out of buildings without anyone noticing, being pulled into a window like wooden rocking chairs and finally being pushed into an elevator shaft. Casey’s character changing his mind and showing up at just the opportune moment and getting that promotion in the first place. I was with them up until the parade of nonsense, both from the characters and physics.

Still, for all the unbelievable action sequences which I didn’t have high hopes for anyway, it was a fun movie. And they played the characters as if they were real, despite what the previews suggested. So if you’re expecting Along Came Polly, you should be pleasantly surprised. If you’re expecting Oceans 11, bring an iPhone and some ear buds. 7 bugs