Jenn and I went to watch J Edgar. It was sold out. We went to see Tower Heist instead. Pretty decent movie, actually. Then we pressed our luck and went to the late showing of J Edgar. We hit a whammy.

The movie started as J Edgar telling a story to a series of FBI plebeians in the setting of a memoir recording. This makes it 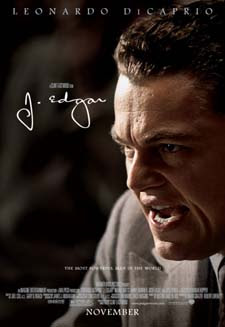 easier to jump around in time and justify a narrator in a movie that wants to take itself seriously. But Clint Eastwood took a few too many liberties with his elastic structure. He had flashbacks within flashbacks, jump cuts across time periods and a Delorean that went 88 mph. It was more confusing than Inception in parts, only without the payoff. He stretched that elastic structure like a fat man’s bathing suit. And now nobody can wear them.

My first thought of the film was “That’s Leonardo with makeup on” and that was it for a while. Sure, he delivered a compelling performance and may get an Oscar nod because that’s what happens with these big budget biopics, but the problem with telling true stories is that they tend to be boring. Life seldom has a second act. I got bored early, making it tough to root for a character. His battle with sexuality was an interesting one, but the cross-dressing scene was overhyped and dull, though not nearly as overhyped as the revelation of how he got the name “J Edgar.” The way it was shot, I think they expected the entire crowd to gasp in unison. This movie lost me somewhere in the details I’m guessing they wanted to get right. And kudos for staying true (at least as far as I know) to the facts. It may not be entertaining, but no one will call Clint Eastwood a sell-out now.

There’s a difference between documentary, fiction and narrative non-fiction. Narrative non-fiction does not do its creators any favors. It gives the audience the illusion of fiction within the confines of documentary storytelling. Case in point, it’s not easy to pull off. That’s why Oliver Stone makes shit up.

In the end, it looks like Eastwood just needed to do something to do this year and not everybody golfs. 4 bugs